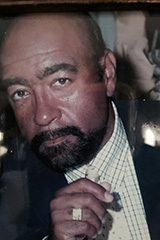 Historian and scholar Dr. Ralph Le Roy Crowder was born on March 29, 1947 in Des Moines, Iowa, to parents Ralph L. Crowder and Allie Crowder. An only child, Crowder attended public schools in Des Moines where he played football, basketball, and track. He graduated from North High School in Des Moines in 1964 and enrolled at Hampton University in Hampton, Virginia, graduating in 1968 with a B.A. in history. After graduation he married Frances Thompson in 1970 and the couple had two children, Ralph Crowder III (1971) and Rahsaan Crowder (1979). Ralph and Frances divorced in 1991.

Crowder began his doctoral work in the African History Peoples Doctoral Program at the University of Minnesota in 1969. While in graduate school he studied Marcus Garvey’s Universal Negro Improvement Association (UNIA), its newspaper, The Negro World, and the paper’s editor, John Edward Bruce. His interest in Bruce led to his 2004 book John Edward Bruce: Politician, Journalist, and Self-Trained Historian of the African Diaspora. Crowder described self-taught Bruce as an “organic intellectual” or a “street scholar” without an “academic portfolio” who interacted with other black thought leaders of the era including W.E.B DuBois and Arthur Alfonso Schomburg. Bruce founded the Negro Society for Historical Research specifically to analyze the ideas of earlier Pan African intellectuals and activists such as Henry Highland Garnett, Martin Delaney, Edward Wilmot Blyden and Alexander Crummell.

Dr. Crowder’s work on Bruce led to his selection as the guest editor of the July 2006 issue of Afro-American in New York Life and History. The title of this issue was Street Scholars and Stepladder Radicals: A Harlem Tradition. He further explored the street scholar tradition in his second book Street Scholars and the Harlem Experience, 1896-1960 (2008), which examined street scholars of Africa such as Dr. Josef Ben-Jochannan, George C. James and John G. Jackson.

While teaching at UCR, Dr. Crowder coordinated student research tours and field trips to Cuba and Brazil. He also led civil rights study trips to Atlanta, Georgia, and Birmingham, Selma, and Montgomery, Alabama. His trips to Cuba led to a new research interest concerning Cuban leader Fidel Castro’s early links to the U.S. black community. Crowder’s first-published findings of this research focused on black heavyweight champion Joe Louis and his efforts to establish an agreement with the Cuban government to develop African American tours of Cuba. Dr. Crowder published his preliminary research on the website BlackPast.org.