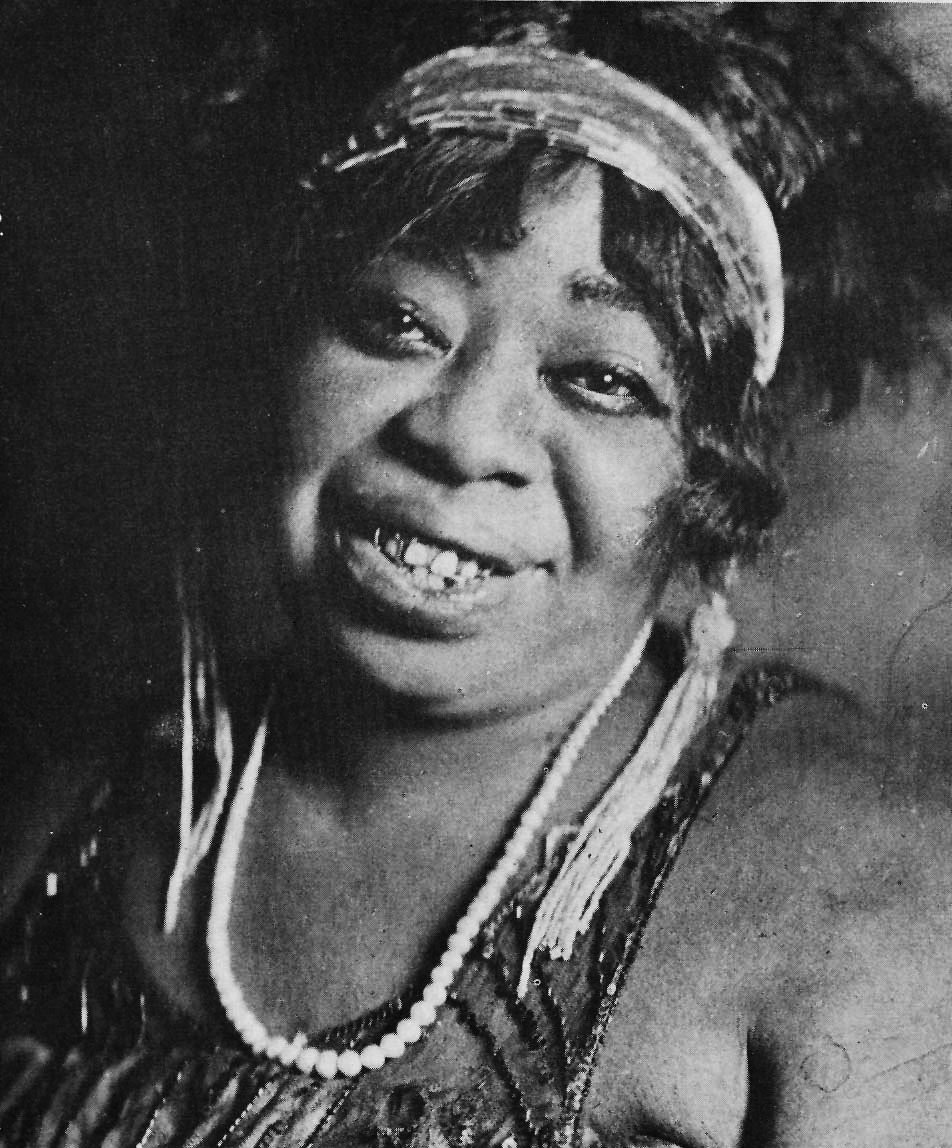 Businesswoman and entertainer Gertrude “Ma” Rainey, known as the Mother of Blues, was the most popular blues singer/ songwriter of the 1920s. She is considered to be the first woman to introduce blues into her performances. As a single woman, she established her own entertainment company in 1917 and after a successful career in vaudeville managed theaters in her home state of Georgia.

She was born Gertrude Pridgett in Columbus, Georgia, on April 26th, 1886 to parents Thomas and Ella Pridgett. Rainey began singing and performing at a young age: her first known public performance was at the age of 14 in a local talent show. When she was 18 she married William “Pa” Rainey and began her career as a performer for travelling minstrel and vaudeville shows.

Between 1904 and 1917 Gertrude and Will Rainey toured with many groups, including the Rabbit Foot Minstrels and the Tolliver Circus, until their marriage dissolved. At times they billed themselves as “Rainey and Rainey, Assassinators of the Blues.” The Rainey performances were more than just concerts, as they included drama and comedy routines as well. This pattern of incorporating various styles of entertainment were typical of early blues performers and other African American musicians of the time. Rainey, as one of the earliest and most respected blues performers on this scene, earned the title “Mother of the Blues.” After her marriage ended, Rainey established her own company called Madame Gertrude Rainey and her Georgia Smart Sets.

Sometime between 1913 and 1916 Rainey met Bessie Smith, a younger artist who sang with many of the same troupes and who may have been influenced by Rainey’s singing style. The relationship between Rainey and Smith illustrates the less conventional aspects of Rainey’s personal life: married twice, she made no secret of her interest in a wide variety of young men, and there is some evidence that she was also romantically inclined toward women. There were rumors that Ma Rainey and Bessie Smith were lovers, and Rainey was once arrested after being discovered by police in the company of several young women at a loud party. Smith bailed her out of jail. Regardless of the true nature of their relationship, which may never be known, this episode illustrates Rainey’s larger-than-life personality, which was a key part of her music and onstage persona and increased her popularity with both black and white Southern audiences.

After nearly twenty years of dramatic performances on the stage, Rainey signed a contract with Paramount records in 1923, only three years after the first blues recording was produced. She recorded almost 100 records between 1923 and 1928 with a wide variety of the best contemporary musicians, including a young Louis Armstrong. During this period, she continued to travel and perform across the South and occasionally in Chicago where she recorded.

Other music forms gained popularity in the late 1920s, and as the Great Depression set in the demand for performers almost disappeared. Rainey retired to Columbus, Georgia in 1935 after the death of her sister and mother. She managed theaters in Columbus and Rome until her death in 1939 of heart failure.