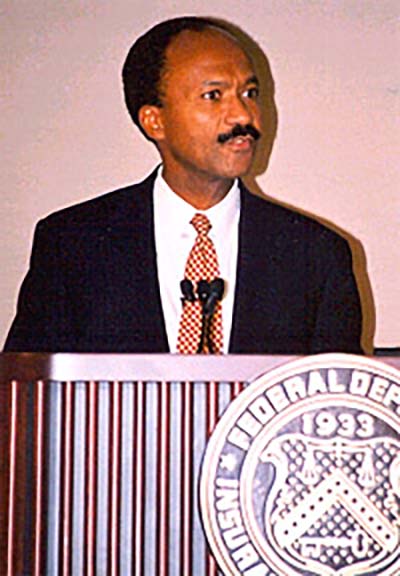 Franklin Raines was born in Seattle on January 14, 1949, and graduated from Franklin High School in Seattle.  From here, he went to Harvard and graduated in 1971 with a B.A. in Government.  He was awarded the prestigious Rhodes scholarship and attended Oxford University for two years, returning to Harvard to earn a law degree in 1976. Raines is a member of Sigma Pi Phi fraternity.

Raines was hired into President Carter’s administration as the assistant director of the White House Domestic Policy Staff.  When Carter lost his reelection bid, Raines was hired as an investment banker by a Wall Street company.  He moved on to become the vice chairman at Fannie Mae.  After five years, President Clinton asked him to return to government work, and Raines accepted a decrease in salary of more than $300,000 to become the director of the Office of Management and Budget where he worked to find compromises in the budget process between the Democratic executive and the Republican Congress.

Franklin Raines returned to Fannie Mae as the chairman and CEO in 1998.  During this time he increased Fannie Mae’s market share in the mortgage resale business.  The “American Dream” initiative put $2 trillion towards increasing home ownership for minorities and women, and at the same time Raines used technology to improve the mortgage application process.  Raines held this position until December 21, 2004, when he was forced into an early retirement due to an evolving scandal.  An investigation by the Securities and Exchange Commission determined that Fannie Mae had overstated profits and that proper accounting would have wiped out 40% of the agency’s profits from 2001 to 2004.

On November 27, 2006 the Office of Federal Housing Enterprise Oversight announced that it will sue Raines to recover some of the $90 million in bonuses he received while CEO of Fannie Mae.