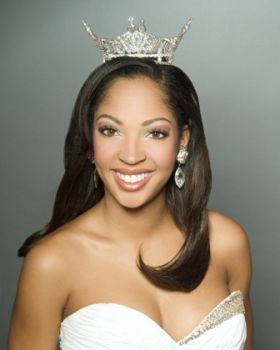 Elwood Watson, a professor of history at East Tennessee State University, is one of the few African American cultural historians to focus his research on the Miss America pageant.  In the article below he examines the success of eight black women in winning the pageant and gaining the coveted crown of Miss America after decades of outright exclusion from the contest that began in Atlantic City in September, 1921.

I remember the date, September 17, 1983. I was in high school. I had just gotten off work at the local grocery store in my hometown, Milford, Delaware. Many teenagers had weekend jobs during these years. I was no exception. It was almost midnight. I had just gotten home and turned on the television. My parents were asleep.  I turned to NBC to catch the end of the Miss America pageant. It was here where I saw legendary television host Gary Collins announce the 2nd runner up. She was a young white woman from Alabama. I was not surprised. Then he announced the first runner up – Suzette Charles, Miss New Jersey. I was like “wow. She’s black!” I immediately became glued to the television. A few minutes later, Collins announces “ladies and gentlemen, Miss America 1984 is Vanessa Williams, Miss New York.” I was admittedly surprised. I sat in front of the televisions for several minutes and watched in silence as Ms. Williams took her walk down the runway. I was so astounded that I woke my parents up to tell them the news.

As various black women have won the pageant, the question of who and what defines beauty has again entered the public discourse. Vanessa Williams’s light skinned features, Suzette Charles biracial background, Debbye Turner’s darker, yet Anglo looking features and  Marjorie Vincent’s classic black features were the subject of considerable debate and commentary within the African American community and the larger society. Some people went as far as to say that Debbye Turner was actually the first “black” Miss America due to the fact that she had “legitimately darker skin.” By the time Kimberly Aiken had won the crown in September 1993, such debates had largely subsided. This was most likely due to the novelty of having a black Miss America had disappeared.   Black women were frequently if not routinely selected among hundreds of contestants.  Moreover, collectively the African American women who had won the coveted title represented the entire spectrum of black beauty.  In fact, the issue of skin color, though pronounced in black [and white] society prior to the 1960s, was much less of an issue by the last two decades of the 20th century.

Observers of contemporary popular culture have provided a number of reasons for the considerable success of black contestants. I have my own theories. By the 1990s, American society had began to actively embrace multiculturalism and diversity (at least publicly).  Also a growing number (and percentage) of 18-24 year old were members of ethnic minority groups, thus it would be reasonable that by this time that a considerable number of women who competed in such pageants would be women of color.

Thirdly, the credentials of pageant contestants since the late 1980s are considerably more impressive than they were prior to that time. By this point the Miss America Pageant, heavily critiqued by feminists in the 1960s and 1970s, was determined to break way from the image of a kitschy, parlor after dinner event dominated by white male judges and organizers that emphasized the physical attributes of the contestants while downplaying their intellectual abilities. Pageant officials now sought more well–rounded and in particular, better educated contestants. In the case of some African American winners, this was particularly true.  At the time of their respective pageants, Debbye Turner was four months shy of receiving her doctorate in veterinarian medicine from the University of Missouri at Columbia. Marjorie Vincent was in her final year of law school at Duke University. They were most likely the best educated contestants in their pageant competitions.

Although initially slow to recognize it, by the 1980s, corporate America came to the realization that African American women drove an annual hundred million dollar plus consumer market and that much of that spending was on clothes and cosmetics. Before long we saw Queen Latifah, Halle Berry (herself a former beauty pageant contestant as the 1st runner up at the Miss USA pageant in 1986), Gabrielle Union, Beyonce, and other black celebrities as spokespersons for L’Oreal, Cover Girl, Maybelline, Oil of Olay and other products. Moreover these and other black women now regularly graced the covers of major women’s magazines such as Elle, Glamour, Vogue, and Vanity Fair. This new practice had intended and unintended consequences.  Corporate America realized (and capitalized) on the knowledge that that African American women were just as aesthetically conscious as any other group of women and were willing to pay handsomely to reflect that ideal. Yet such changes in the public presentation of the image of black beauty on the cover and in the pages of these magazines undoubtedly transformed in the minds of many Americans of all races the always highly subjective definition of beauty.  No doubt, pageant judges and organizers noticed these related transformations and decided that it would be economically and politically wise to adopt a policy of  racial inclusion.

While talent is not the only segment of the pageant, it is a significant portion of a contestant’s score.  No one can deny that the black winners and finalists have delivered some of the most memorable performances in the history of the pageant. The  audience couldn’t wait to applaud  Suzette Charles engaging performance of “Kiss Me in The Rain,” Vanessa Williams sultry version of “Happy Days Are Here Again,” or Debbye Turner’s skillful use of the Marimba in her jazzy twist of the classic ”Flight of The Bumblebee.,” Marjorie Judith Vincent will long be remembered for her thunderous playing of the classic piece “C’ impromptu” by Chopin.  All of these women gave incredible performances at the state level which often propelled them into the national competition. Since such performances are considered even more important at the national level, they already had an advantage when they arrived to compete in the national pageant.

Subtle changes in the organizational structure of the pageant also helped African American contestants.  Under intense criticism to revamp its image, many of the old guard who dominated the pageant for decades passed away or retired by the 1970s making way for a newer group of people who understood the importance of reaching outside its traditional fan base as crucial to the survival and success of the pageant. In an effort to appear relevant the pageant resorted to a number of reality television like stunts such as confessional interviews, gossipy comments among contestants about one another etc.. to appeal to the 18-34 year old television demographic. Pageant organizers took advantage of the fact that Miss America Pageant was reality television at the moment reality television began to saturated American popular culture.

Pageant organizers also understood the 18-34 demographic that was most likely to view and support the program and purchase its advertised products was disproportionately biracial and multiracial.  Moreover whites who still dominate this demographic, have come of age in a post-segregated America and thus entertain ideas about race and beauty that contrast sharply with earlier generations of Americans.  Such an audience embraced ethnic pluralism and diversity. In short, they support contestants who look like them or they are not alarmed by the prospect that some contestants do not share their racial background.  By the 1980s the Miss America pageant was different because America by that point was different.

Relatedly the pageant, in an attempt to increase its audience appeal, ceased selecting relatively obscure and overwhelmingly white judges who were little known outside of their professions and instead recruited major Hollywood celebrities, professional athletes, supermodels, talk show hosts, well known TV actors, rap artists etc., to serve as judges.  Personalities as diverse as Rush Limbaugh and Vivica A. Fox, Debbie Allen and Chris Matthews, Delta Burke and  Greta Van Sustren,  have all judged the national competitions.  These are people who are more likely to be worldlier, holistic, and even controversial in their thinking and decision making, thus giving contestant selection an edginess unknown in the 1950s or even the 1970s.  That many of the judges in the post 1980 statewide and national contests are African American no doubt plays a role as well.  Thus, all judges bring a mindset that says diversity is a characteristic they embrace or at the very least they are unwilling to reject.  While we have yet to see a Latino Miss America, there is no doubt that we will before long. In fact, the rival Miss USA pageant has had seven Latino winners since the 1985, in addition to several black winners since 1990.

For the time being, the Miss America Pageant is no longer on a major television network and instead is hosted on The Learning Channel (TLC). However, it is an event that seems to have nine lives. It is has survived the Great Depression, World War II , the feminist criticism hurled toward it during the late 1960s and throughout the 1970s, sex scandals and other related events that have buried other popular contests from earlier eras.  It is resilient. If her press conference was any indication, Carissa Cameron will carry out her duties with admirable grace and class during her one year reign. She will no doubt be a fantastic representative in carrying out the legacy of Miss America Pageant for all women, and especially for African American women.

Elwood Watson and Darcy Martin, There She Is, Miss America, The Politics of Sex, Beauty and Race in America’s Most Famous Pageant (New York: Palgrave MacMillan, 2004); Maxine Leeds Craig, Ain’t I a Beauty Queen? Black Women, Beauty, and The Politics of Race (New York: Oxford University Press, 2002);  Sarah Banet-Weiser, The Most Beautiful Girl in The World: Beauty Pageants and National Identity (Berkeley: University of California Press, 1999)