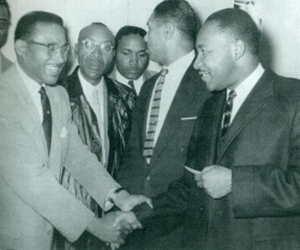 Minority-majority cities are formed. They do not just happen because minorities are forced into moving there. “Cities of Color” (a term coined by Albert M. Camarillo) become that way when citizens who are members of minority groups make the choice to take an active role in political action, social and cultural life, and economic development, thus forging a city identity that is publicly acknowledged, accepted, and that persists over time. In Seaside, blacks formed the largest minority group, but they were never a majority of the city’s population. Why then was Seaside perceived as a black city in the post World War II era?

In the first decade of the 20th Century Seaside was an unincorporated suburb of Monterey, located only a mile from the famous Del Monte Hotel. Its founders in the 1880s, many of whom still resided in the community twenty years later, were a group of middle class whites who had envisioned Seaside as a resort destination. In 1917 as the United States entered World War I, the federal government established Fort Ord as a military training base for soldiers stationed in the nearby Presidio in Monterey. The locating of the sprawling base there discouraged both housing and infrastructure development and led to Seaside’s reputation as a less desirable community than neighboring Monterey. The Depression in the 1930s reinforced that perception as migrants from the American Dust Bowl flocked into Monterey for work in the canneries. They quickly settled in Seaside, where property values were lowest in the area. In fact squatters often simply claimed a piece of land and built a home on it. World War II brought expansion of Fort Ord and another new population infusion of soldiers, many of whom were black and Filipino, along with military families who were mixed race.

When President Harry Truman ordered the full desegregation of the armed services by Executive Order 9981 in 1948, Seaside was still an unincorporated suburb of Monterey with a population of fewer than 10,000. Although desegregation impacted all military bases, Fort Ord was viewed as a “test case” because of its relatively large population of soldiers of color and California’s more liberal race relations reputation. The surge of black military personnel and their families, as well as soldiers of all races, doubled the population, so that by 1956 the number of Seaside residents had grown to 21,750. Incorporated in 1954, Seaside annexed parts of Fort Ord in 1968, which increased its population to 32,000.

By 1970, Seaside was the most populous city on the Monterey Peninsula and the second largest in the county after Monterey. Between 1960 and 1970 the population of Seaside had more than doubled to 35,940, as did the black population which stood at 7,341 or about 20 percent of all city residents. A decade later, the changes were even greater. The black population in 1980 stood at 29.3 percent, about 13,000 while the white population decreased to 47 percent. By 1980, although no single group could claim majority status, Seaside became known as the center for black settlement and had the most concentrated population of blacks in California between Oakland and Los Angeles.

Despite the adverse effects of being connected to the military base (crime, violence, and a transient population), and within an environment where racism, segregation, and resistance to African American residents were apparent, Seaside represented hope and opportunity for blacks. Richard Joyce described Seaside as a “utopia for black people” when he arrived in 1952. Unlike other cities in California or the rest of the nation and especially the American South, he claimed, “everything was open in Seaside for young, enterprising black people. Things weren’t fixed. The city was unincorporated. There was tremendous opportunity for us to create something new.”

The African Americans who came to Seaside between World War II and 1980 did just that. They were mostly military people, sophisticated travelers who had often served in Europe, the Far East and throughout the United States. They were relatively well educated and most of the African American officers were graduates of black colleges in the South. These officers and their families were steeped in the civil rights movement that was successfully changing the structure of American life. Everyone, from Dr. Martin Luther King to Rosa Parks, to Dolores Huerta visited Seaside in the postwar era bringing the message of interracial cooperation and coalition-building.

Black women, many of them the wives of army officers, were able to engage the community politically in ways that their husbands, who were active duty soldiers could not (active duty military personnel were forbidden to participate in local politics). This black demographic contrasted sharply with the white one. Whites in Seaside tended to be less well educated, migrants from the dust bowl or nearby communities, who were small business owners rather than professionals.

Although whites were the first of Seaside’s mayors and city councilmen, blacks, both women and men by the 1970s quickly organized into a formidable political force in the city even if they never dominated it completely. Their strategies were a middle way, a different civil rights political activism. Black Seaside civil rights activists built coalitions with whites, Hispanics, and Asians to battle for desegregated housing, create fair employment practices, desegregate school faculties, and most important, elect blacks to political office.

While Southern civil rights activists focused on voter registration, and northerners focused on busing, Seasiders were getting elected as mayors and members of the city council, being appointed to important planning commissions, and working as city managers and high level staffers in city government. While civil rights activists in Boston and Chicago were integrating schools, Seasiders integrated school faculties, the school board, and the highest levels of school administrations. When rioting broke out in Watts, Seasiders, who had always built coalitions and governed collectively with other groups, held forums discussing issues of fairness and social justice. Seaside black youth marched too, but they also created an alternative to the racial identity politics of other cities during the 1960s through the 1980s, which makes their story unique in the history of the American civil rights movement.

Seaside’s history has been intimately tied to Fort Ord, but it is far more than just another military town and African American settlement. Seaside’s history reveals fundamental patterns that have shaped California and the West. The story of a multi-racial population struggling to live together, first as a military town then in a post-military world, is a huge part of Seaside history as it has been and continues to be in metropolises such as Los Angeles, San Francisco, Oakland and other large urban areas in California. Indeed, Seaside is one of dozens of California Cities of Color, cities and suburbs that now have majorities of minorities. Seaside is also reflective of so many California cities that during the Civil Rights Movement was forced to grapple with issues of racial inclusion and racial justice. Yet it embraced a municipal model uniquely characterized by a politics of inclusion.

By the 1980s Seaside, like so many cities throughout the Southwest and the nation began to be transformed demographically by mass immigration from Mexico. The challenge for contemporary Seasiders, white, black, and Latino, is to continue the tradition of political inclusion and cooperation.