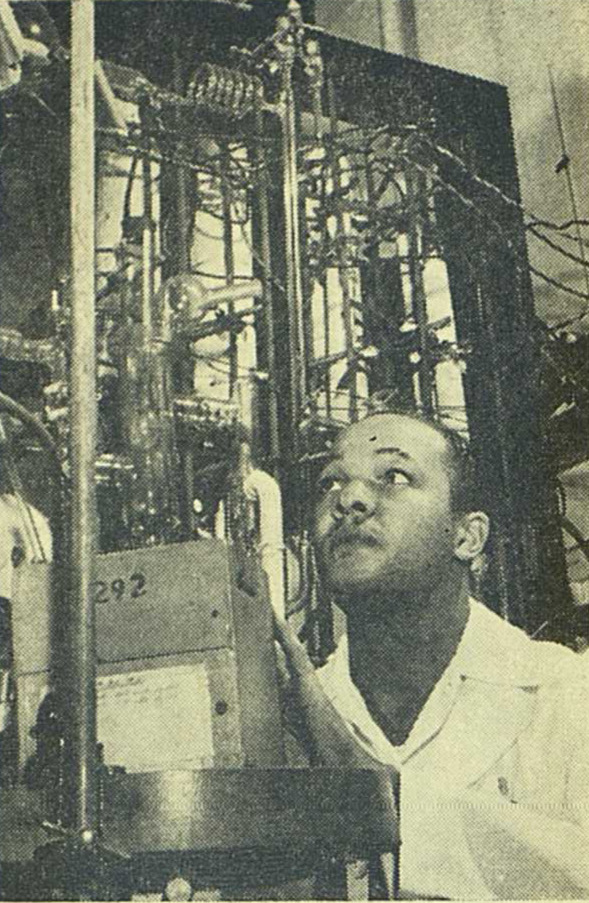 Born May 31, 1918 in Philadelphia, Lloyd Albert Quarterman, a chemist, was one of the few African American scientists and technicians to work on the Manhattan Project, the top secret effort to design and build the atomic bomb during World War II.

Quarterman developed an interest in chemistry from a young age partly by using toy chemistry sets his parents gave him.  He attended St. Augustine’s College in Raleigh, North Carolina where he developed a reputation as a scholar and star football player. After receiving his bachelor’s degree from St. Augustine’s in 1943, he was quickly recruited by the War Department to work on the Manhattan Project. Though he was only a junior chemist on the project, Quarterman had the opportunity to work closely with Enrico Fermi at the University of Chicago and with Albert Einstein at Columbia University.

Quarterman was a member of the team of scientists who isolated the isotope of uranium (U 238) necessary for the fission process, which was essential to the creation of the atom bomb. Once the war ended, he continued to work at the University of Chicago’s laboratory hidden beneath the campus football stadium during the war and later rebuilt in a Chicago suburb and renamed the Argonne National Laboratory. After the war, Quarterman returned to school and earned a master of science from Northwestern University in 1952. He would return to Argonne and remain at the national laboratory for the next thirty years.

Beyond his work on the bomb, Quarterman worked with fluoride solutions to create new chemical compounds and new molecules. He was skilled at purifying hydrogen fluoride, a highly corrosive gas. In 1967 he developed a corrosive resistant “window” made of diamonds in order to better study hydrogen fluoride. His innovation was called the “diamond window.”  He also created a xenon compound which surprised the world of chemistry because it was believed that xenon was an “inert” gas and supposedly could not be combined with other atoms. At the time of his death, in 1982, Quarterman had initiated work on a project to develop “synthetic blood” but encountered ethical and political opposition to his research.

The atomic scientist was a member of Sigma Xi, the American Chemistry Society, the Society of Applied Spectroscopy, the American Association for the Advancement of Science, Scientific Research Society of America, and the Chicago branch of the National Association for the Advancement of Colored People (NAACP).  He spoke often to young African Americans urging them to pursue careers in science.

Lloyd Quarterman died in Chicago, Illinois in July of 1982 at the age of 64.  Before his death, he had instructed that his body be used for scientific research.