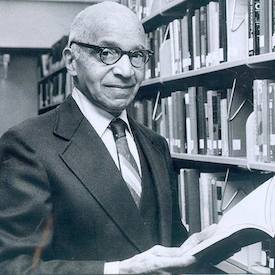 Noted historian, scholar, and educator Benjamin Author Quarles was born in Boston, Massachusetts on January 23, 1904.  His father Arthur Benedict Quarles was a subway porter, and his mother Margaret O’Brien Quarles was a homemaker. In his twenties, Quarles enrolled at Shaw University in Raleigh, North Carolina, the oldest historically black college in the South, where he earned a B.A. in 1931.  From Shaw, Quarles went to the University of Wisconsin in Madison, Wisconsin, where he earned an M.A. in 1933 and a Ph.D. in American History in 1940.

While finishing his Ph.D at Wisconsin, he taught at his alma mater, Shaw (1935-1939), and at Dillard University in New Orleans, Louisiana.  After rising to full professor and dean at Dillard, Quarles relocated in 1953 to Morgan State College (now University) in Baltimore, Maryland and remained there for the rest of his academic career.  At Morgan, Quarles reached near-legendary status as the long-time head of the History Department (1953-1974), a revered teacher and counselor, an intellectual and professional mentor for two generations of African American scholars, and an internationally-acclaimed historian of the black experience in the United States.

A prolific writer, Quarles published ten books, twenty-three major articles, and hundreds of shorter pieces of various sorts.  At least four of his books attained national significance:  Frederick Douglass (1948), which grew out of his doctoral research and remains the authoritative source for most of what is known about Douglass; The Negro in the American Revolution (1961), one of the first books to demonstrate the importance of including African Americans in the mainstream narratives of U.S. history; The Negro in the Making of America (1964), a text used in courses throughout the country; and Black Abolitionists (1969), a book that helped propel a major reassessment of the anti-slavery movement.  The height of Quarles’s reputation as a scholar came at the same time many traditionally white faculties began to hire African Americans, and Quarles himself received a nearly continuous barrage of overtures from some of the nation’s most prestigious universities.  Notwithstanding his personally optimistic views on the progress of racial integration in the U.S., however, he consistently and adamantly chose to remain at Morgan.

Quarles was refined, dignified, and professional.  The word “gentleman” was invariably used in describing his demeanor.  Many African American scholars who entered the history profession during and after the nineteen sixties looked to Quarles as one of the principal transitional figures whose influential scholarship and unfailing support had opened wider opportunities for them.  “I can say categorically and without fear of contradiction,” wrote John Hope Franklin, “that Benjamin Quarles was one of the finest, most original historians of his generation.”