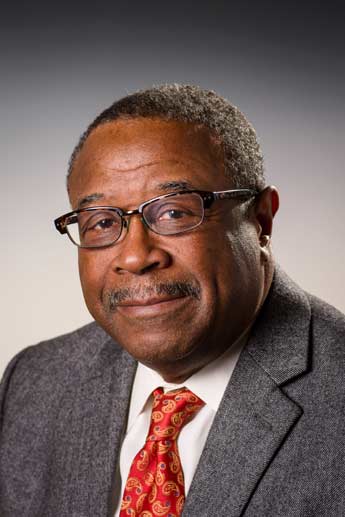 Thomas “Les” Purce, politician, businessman, educator, university administrator, and grandson of pioneering black Idahoans, was born on November 13, 1946 to John and Idaho Purce in Pocatello, Idaho.  His grandfather, Tracey Thompson, was a well-known Idaho rodeo star.  As one of five siblings, he attended primary and secondary schools in Pocatello and was an undergraduate and graduate student at Idaho State University in that city.  In 1969 Purce earned a B.A. in psychology, followed by an M.A. Ed. in student personnel in 1970, and an Ed. D. in counselor education in1975.  He also completed Harvard University’s Institute for Educational Management and did additional graduate work at Washington State University in clinical psychology.

On July 1, 2000, Dr. Purce became the first African American president of The Evergreen State College, a public liberal arts and sciences college in Olympia, Washington.  Purce came to Evergreen with years of administrative experience.  During the 1980s he began his career in higher education at Idaho State University as Special Assistant to the President and then as Director of the university’s Research Park and Economic Development Program.  Purce arrived at Evergreen in 1989 and between 1990 and 1995 he served as Vice President for College Advancement, interim President, and Executive Vice President.   In 1995, however, he left Evergreen to become Vice President of Extended University Affairs and Dean of Extended Academic Programs at Washington State University in Pullman, Washington.

Before serving in various administrative capacities in higher education, Dr. Purce was active in the political arena. While in his late twenties, Purce was elected to the Pocatello City Council in 1973 and in 1976 he became Pocatello’s first black mayor.  In  fact with his election to the Pocatello Council, Purce became the first black elected official in Idaho.  His effectiveness as a civic leader earned him a position in 1977 in Governor John Evans’s administration as director of Idaho’s Department of Administration and then of the Department of Health and Welfare.  In the corporate world, Purce was Chief Accounting Officer  of Power Engineering Inc., a successful electrical engineering company in Hailey, Idaho between 1983 and 1985.

President Purce currently serves as Vice President of the Board of the Northwest African American Museum.  He has also held several appointments on boards and councils, including the Community Foundation of South Puget Sound, One World 2011, and Washington Campus Compact.  He also serves as a member of the Council of Presidents for the National Association of Intercollegiate Athletics, the Renewable Energy Subcommittee of the President’s Climate Commitment, the ACUPCC Academic Subcommittee, and the NAIA Cascade Collegiate Conference Eligibility Subcommittee.

During his career, Purce has received numerous honors and awards.  In 2009, for his leadership in education, the University of North Carolina Asheville presented Purce with an honorary doctor of humane letters degree just before he gave the Commencement speech.

Dr. Purce is married to Jane Sherman and they have three adult daughters Deborah, Sarah, and Miriam.  The family lives in Olympia, Washington.