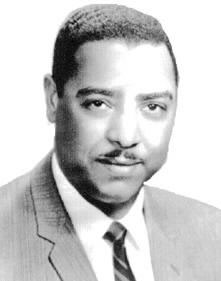 Educator and theologian Samuel DeWitt Proctor was born in Norfolk, Virginia on July 13, 1921. Both of his grandparents had received a university education, which was considered unusual for the time. Proctor as a child attended the Congregational Church in Norfolk founded by his great-grandfather, Zechariah Hughes.  Samuel Proctor graduated from high school in 1937 and enrolled at Virginia State College, after winning a scholarship there.  He dropped out of college and then enrolled in the U.S. Naval Apprentice School to become a shipfitter only to abandon that career choice a year later.

Proctor became interested in religion after enrolling at Virginia Union University in 1940 and was baptized. He married his classmate Bessie Tate and graduated with a bachelor’s degree in 1942.  He then spent a year studying at the University of Pennsylvania.  Afterwards he enrolled Crozer Theological Seminary in Upland, Pennsylvania, to pursue a career in the Christian ministry.  Proctor was the only black student in the institution at the time.  He received a Bachelor of Divinity degree from Crozer in 1945.

Proctor then accepted a position as pastor at the Pond Street Church in Providence, Rhode Island. He moved to Boston a year later, enrolling at the Boston University School of Theology and received a doctorate degree there in 1950.  While giving a lecture at Crozer Theological Seminary, Proctor met and befriended Martin Luther King, Jr., who was studying at Crozer in the early 1950s.

Proctor was hired to teach theology at Virginia Union University in 1951.  He quickly rose to dean, vice-president, and finally president in 1955 at the unusually young age of 34. King invited Proctor to Montgomery, Alabama to speak during the bus boycott where he gave sermons on religion and social change. These sermons gave Proctor a national reputation as a minister who advocated social justice and an end to racial segregation.

In 1960, Proctor became President of North Carolina Agricultural and Technical College in Greensboro within weeks of the first sit-ins at the Woolworth Department Store.   Proctor did not publicly support the Greensboro sit-ins but raised money for arrested students and helped to find them lawyers. He took a leave of absence from the Agricultural College in 1963 to serve as associate director of the Peace Corps operation in Africa.

After Proctor returned to the United States, he spent a year as president of the National Council of Churches.  In 1968, he accompanied Hubert Humphrey and Thurgood Marshall to Africa and spoke out against the political corruption apparent in that continent.  Dr. Proctor was a member of Kappa Alpha Psi and Sigma Pi Phi fraternities.

Following a lecture given at Rutgers University in 1969, one year after the assassination of Dr. King, Proctor became the first Martin Luther King Distinguished Professor of Education.  Proctor held this position until his retirement in 1984. Proctor then served briefly as pastor of the Abyssinian Baptist Church in Harlem.