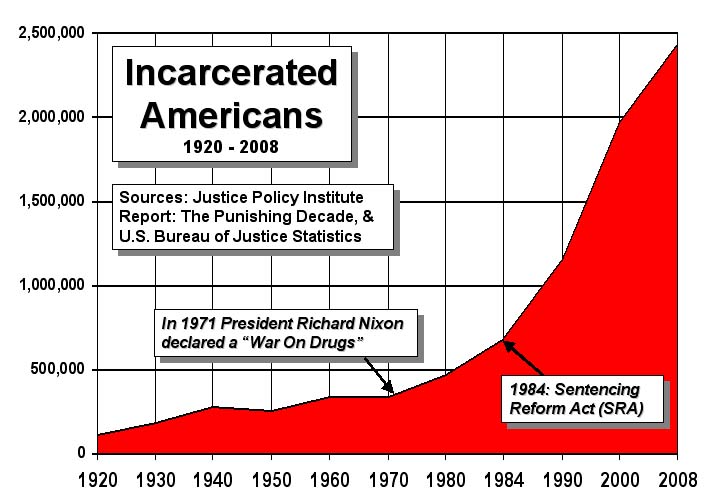 The Prison Abolition Movement is a social campaign to eliminate prisons. The movement began in the 1980s following the War on Drugs whose consequence was to increase the U.S. prison population from 500,000 in 1980 to 1.3 million in 1990 and 2 million in 2000. The leaders of this movement felt that too many non-violent people were being sent to prison, that the majority of the people being incarcerated were locked away because they were too poor to hire an attorney, and that a disproportionate number of them were men and women of color.

The goal of the prison abolitionists is to reform the criminal justice system and to offer alternatives to incarceration for those who commit a crime. Prison abolitionists believe that imprisoning human beings is not justified, that the focus should be on the needs of the individual who committed the crime rather than his or her punishment by society.  They also believe that most crime is a consequence of economic circumstances such as poverty and racial discrimination and as such the underlying causes should be addressed rather than exacerbated by imprisonment.

Prison abolitionists make it clear that they don’t suggest freeing everyone from prison immediately but that a societal change must take place so that in the future prisons won’t be needed. Some prison abolitionists recognize that prisons may still be needed in the future, but only as a last resort. The Prison Abolition Movement is especially intent on making the public aware of how disproportionately people of color, especially African Americans, are incarcerated, and the devastating impact that incarceration has on communities of color both in terms of the removal of able-bodied people from those communities and their return as mostly unemployable individuals who often return to criminal activity if they are young or become burdens on these communities if they are old.

One of the most well-known prison abolitionists is Angela Davis. She and the organization she co-founded, Critical Resistance, work to challenge the criminal justice system to put an end to overincarceration. There are several other groups that have similar goals including the Prison Activist Resource Center, and Black and Pink. The latter group works to challenge the discrimination that members of the LGBTQ community face both inside prisons and when they are released.

Some alternatives that prison abolitionists have proposed include having effective drug treatment programs available, providing better resources for finding work or getting an education either while people are incarcerated or once they are released, and doing volunteer work in order to improve social interactions between those formerly incarcerated and the communities they return to once they are released.

Many prison abolitionists praised the fact that in 2015, President Barack Obama became the first sitting president to visit a United States prison and that he reduced the sentence of hundreds of drug offenders who were non-violent. However, many of these abolitionists, including Angela Davis, were disappointed that he waited until his second term as president to take these actions and criticized him for not doing enough to make institutional changes in the prison system.