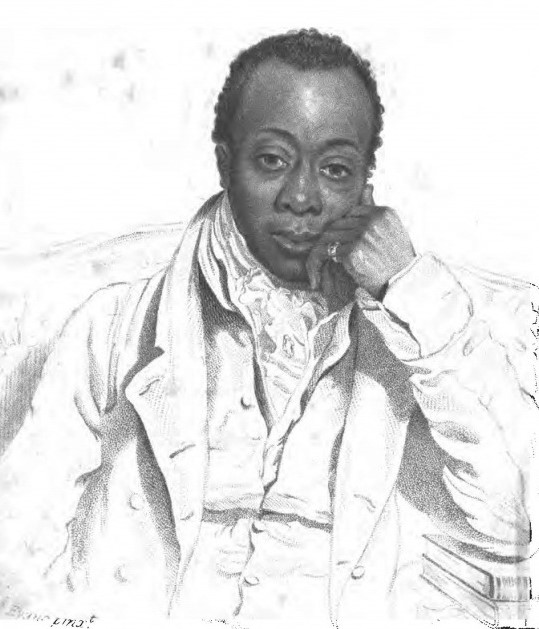 Prince Saunders was born around 1775 in Lebanon, Connecticut.  He was baptized in 1784 at Thetford, Vermont and was raised by Vermont lawyer George Oramel Hinckley.  Hinckley became Saunders’ sponsor from 1807 to 1808.  With Hinckley’s sponsorship, Saunders was able to attend Dartmouth College.  Dartmouth President John Wheelock in turn recommended Saunders, in 1808, to Unitarian minister William Ellery Channing who set him up to work among black students in Boston.

In November 1808, Saunders began his four-year career as a teacher of Boston’s African School.  In 1811, he became a secretary for the African Masonic Lodge while founding the Belle Lettres Society, an integrated literary group.

In 1815, Saunders negotiated with Abiel Smith, a wealthy merchant, to provide funds for other schools for blacks in Boston.  Smith eventually granted Saunders about $4,000 for the education of African American children in the city.  Other funds came from Smith’s estate after his death but by 1820 Boston city taxes helped support the schools.  It was at one of these schools that Saunders met Thomas Paul, a leading Boston Baptist minister.

Saunders and Paul began to call for the emigration of African Americans back to Africa in order to escape racism, rediscover their cultural heritage and help in the economic and political development of the continent.  Saunders was soon engaged to the daughter of Paul Cuffee, a black merchant shipper who is credited as the first African colonizationist.  In 1815 Cuffee transported 38 Boston blacks to Sierra Leone in West Africa.  Saunders and Paul began traveling across the United States promoting emigration among free blacks.  During an 1816 speaking tour in England, Saunders attracted the attention of Great Britain’s most prominent abolitionists, William Wilberforce and Thomas Clarkson, who in turn persuaded Saunders to become the adviser to Haiti’s Emperor, Henri Christophe.

Saunders first met with Emperor Christophe on February 16, 1816.  He became Christophe’s official courier after impressing the emperor with his manners and education.  While delivering papers in London, Saunders seized the moment to impress officials with his knowledge of the Haitian government.  He published both the Haytian Papers as a commentary on Christophe’s rule and the first English translation of Haitian laws.  In late fall of 1816, Saunders returned to Haiti with English teachers.  Emperor Christophe gave them his support by providing teaching facilities.  After less than a month in Haiti, Saunders was appointed as courier to the Court of St. James, in the Caribbean.  During his career in the Caribbean, Saunders had introduced vaccination into Haiti beginning with Christophe’s children.  Saunders also organized several schools throughout the nation.

By the spring of 1818, Saunders returned to Boston now convinced that Haiti was the most suitable destination for U.S. emigrants.  He called Haiti the “paradise of the New World” and described the Caribbean nation a model refuge for freed blacks from the United States.

In August of 1820, Saunders returned to Haiti and persuaded Emperor Christophe to send a ship to Philadelphia to transport African Americans emigrants to Haiti.  As Saunders was about to set sail for Philadelphia on the vessel, the Haitian Army rebelled and overran Port-au-Prince.  Emperor Christophe committed suicide and the new rulers ended Saunders’ plan for black colonization in Haiti.

Saunders returned to Philadelphia in July of 1821, deeply in debt.  He was also disappointed in the new regime which closed the schools Christophe had established and rejected efforts to modernize the government and revitalize the economy.  Yet after a year in Philadelphia, Saunders moved back to Haiti because of racial discrimination in the United States.  Prince Saunders died in Port-au-Prince in February 1839.