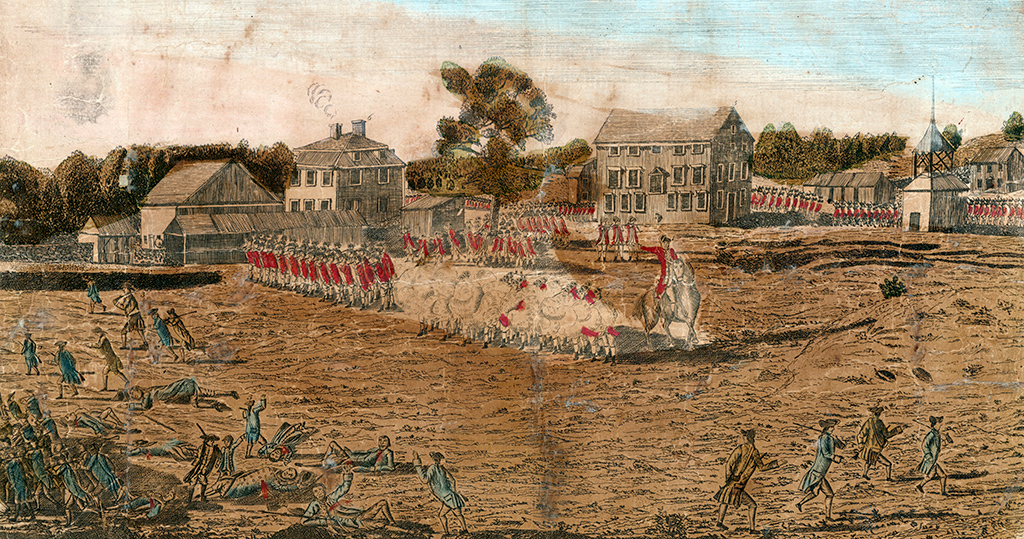 Although much attention is paid to Crispus Attucks who died during the 1770 Boston Massacre, the first African American to take up arms and fight in the American Revolutionary War was a slave who in his youth was known simply as Prince. Though some scholars claim he arrived from Africa it is more likely he was born near Lexington, Massachusetts, circa 1740 and became the property of farmer and grist mill operator Benjamin Estabrook.

When an advanced guard of 240 British soldiers arrived at Lexington on the morning of April 19, 1775, hoping to seize munitions and instead clashed with 70 rebellious militiamen, 35-year-old Prince and his owner, now both Minutemen, participated in the skirmish at Lexington Commons where the first shots of the American Revolution were fired.

The British force easily routed the volunteers at Lexington Commons. All eight combatants killed in the engagement were on the patriot side but Prince was fortunate to have escaped with just a shoulder wound, thus becoming one of the first people wounded in the cause of the Revolution. Benjamin, who was also a town selectman and justice of the peace, fled the Lexington Commons battlefield uninjured.

Prince recovered from his wound and continued fighting in the Continental Army until the war’s end in 1783, participating in most of the campaigns of the war in New England and serving finally in Colonel Michael Jackson’s regiment. Prince was rewarded for his service with emancipation. At the end of the conflict he adopted the Estabrook surname and from that point was addressed as Prince Estabrook. He remained a resident on the property of his former owner as a paid laborer until Benjamin Estabrook died in 1805. Prince, now in his mid-60s, moved to Ashby, Massachusetts with Benjamin’s son, Nathan Estabrook, and lived there in his own house.

It is unknown if Prince ever married or had offspring. The date of his death is also unknown but most observers believe it was in 1830 which would have made him approximately 90. Prince was buried in Ashby in the pauper’s section of Ashby’s First Parish Unitarian Universalist Church graveyard. In 1930, a century after his assumed death, a headstone was placed on Prince’s final resting place. At a ceremony marking the occasion, Rev. Henry A. Estabrook, a descendant of the Lexington Estabrooks, eulogized Prince as a “brave defender of American liberty,” an ironic characterization considering he lived as slave for the first four decades of his life. In 2008, a bronze plaque was affixed to a boulder at Buckman Tavern, the place where Prince and his fellow Minutemen awaited the British assault. The plaque honors Prince Estabrook and the thousands of other African Americans who fought in the American Revolutionary War.