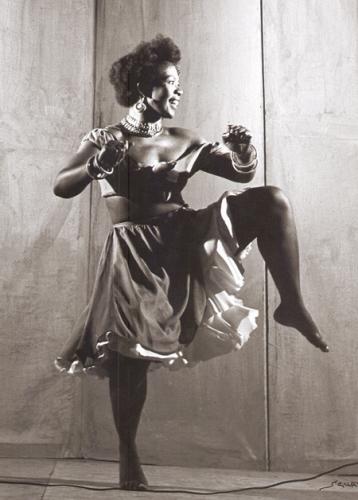 Pearl Primus, dancer and choreographer, was born on November 29th, 1919, in Trinidad. Her parents, Edward and Emily Primus, immigrated to the United States in 1921 when Pearl was still a small child.

Primus was raised in New York City, and in 1940 received her bachelor’s degree in biology and pre-medical science from Hunter College. However, her goal of working as a medical researcher was unrealized due to the racial discrimination of the time. When she went to the National Youth Association (NYA) for assistance, she was cast as a dancer in one of their plays.

Primus’s promise as a dancer was recognized quickly, and she received a scholarship from the National Youth Association’s New Dance Group in 1941. She soon began performing professionally both as a soloist and in dance groups around New York. In 1942, she performed with the NYA, and in 1943 she performed with the New York Young Men’s Hebrew Association. By 1943, she appeared as a soloist.

In 1948 Primus received a federal grant to study dance, and used the money to travel around Africa and the Caribbean to learn different styles of native dance, which she then brought back to the United States to perform and teach. She also choreographed dances that contained messages about racism and discrimination. One of her dances, Strange Fruit, was a protest against the lynching of blacks.

Eventually Primus formed her own dance troupe which toured the nation.  She also opened a dance school in Harlem to train younger performers.  In 1953 Primus returned to Trinidad to study dance there, and met her husband, Percival Borde. They married, and had one son together who also showed promise as a dancer.  In 1958 at the age of 5, he made his professional debut and joined her dance troupe.

Pearl Primus continued to teach, choreograph, and perform dances that spoke of the human struggle and of the African American struggle in a world of racism. In 1978, she completed her doctoral degree in dance education at New York University’s School of Education.  Also by this point her dance school, the Pearl Primus Dance Language Institute, was well known throughout the world.  In 1979, Percival Borde passed away. After his death Primus rarely performed although she continued to occasionally present African and African-American dances around the country. She also taught ethnic studies from 1984 to 1990 at the Five Colleges consortium in western Massachusetts.