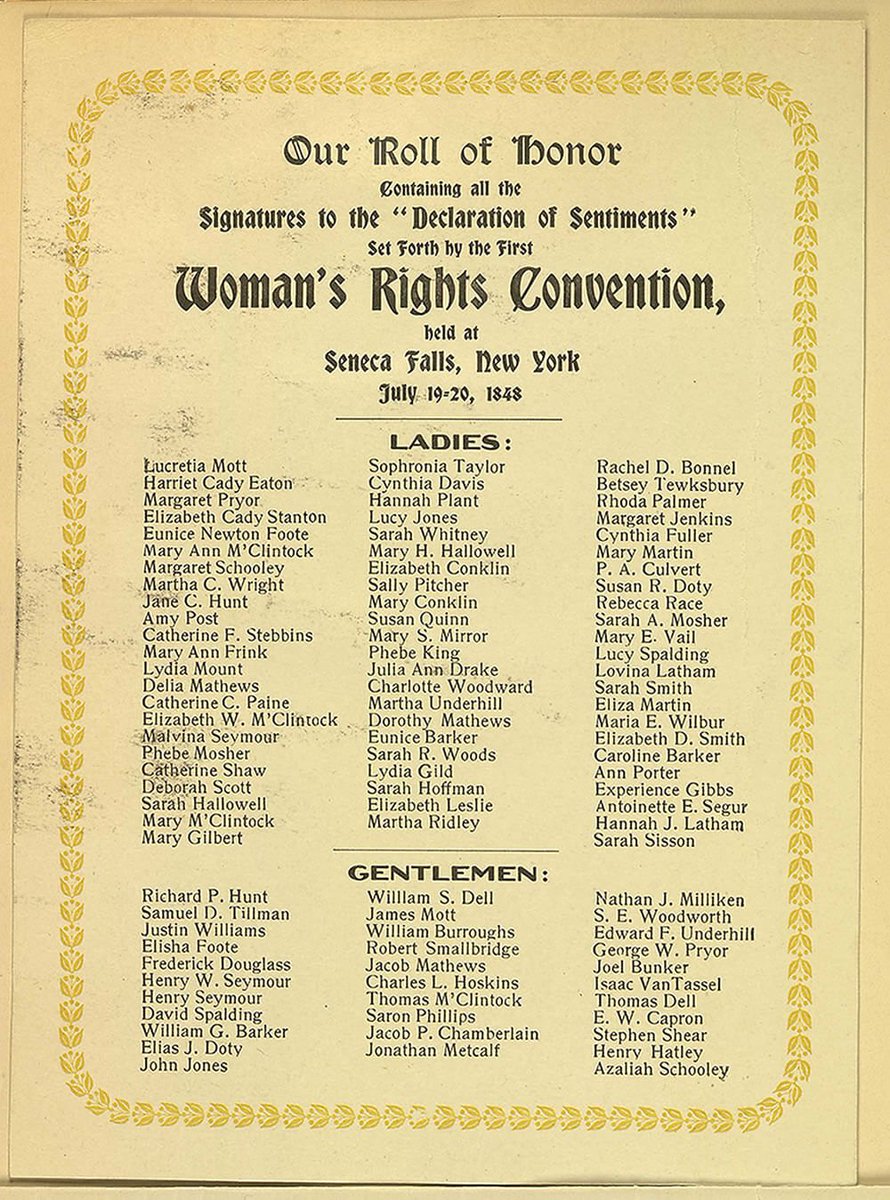 On July 19-20, 1848, 68 women and 32 men attended the First Women’s Rights Convention which was held in the upstate New York town of Seneca Falls. One of those men was Frederick Douglass. He wrote his impressions of the Convention which appeared in his Rochester, New York newspaper, The North Star, on July 28, 1848. His article appears below.

One of the most interesting events of the past week, was the holding of what is technically styled a Woman’s Rights Convention, at Seneca Falls. The speaking, addresses, and resolutions of this extraordinary meeting, were almost wholly conducted by women; and although they evidently felt themselves in a novel position, it is but simple justice to say, that their whole proceedings were characterized by marked ability and dignity.  No one present, we think, however much he might be disposed to differ from the views advanced by the leading speakers on that occasion, will fail to give them credit for brilliant talents and excellent dispositions.

In this meeting, as in other deliberative assemblies, there were frequently differences of opinion and animated discussion; but in no case was there the slightest absence of good feeling and decorum. Several interesting documents, setting forth the rights as well as the grievances of woman, were read. Among these was a declaration of sentiments, to be regarded as the basis of a grand movement for attaining all the civil, social, political and religious rights of woman.

As these documents are soon to be published in pamphlet form, under the authority of a committee of women, appointed by that meeting, we will not mar them by attempting any synopsis of their contents. We should not, however, do justice to our own convictions, or to the excellent persons connected with this infant movement, if we did not, in this connection, offer a few remarks on the general subject which the Convention met to consider, and the objects they seek to attain.

In doing so, we are not insensible that the bare mention of this truly important subject in any other than terms of contemptuous ridicule and scornful disfavor, is likely to excite against us the fury of bigotry and the folly of prejudice. A discussion of the rights of animals would be regarded with far more complacency by many of what are called the wise and the good of our land, than would be a discussion of the rights of woman. It is, in their estimation, to be guilty of evil thoughts, to think that woman is entitled to rights equal with man.  Many who have at last made the discovery that negroes have some rights as well as other members of the human family, have yet to be convinced that woman is entitled to any.

Eight years ago, a number of persons of this description actually abandoned the anti-slavery cause, lest by giving their influence in that direction, they might possibly be giving countenance to the dangerous heresy that woman, in respect to rights, stands on an equal footing with man. In the judgment of such persons, the American slave system, with all its concomitant horrors, is less to be deplored than this wicked idea.

It is perhaps needless to say, that we cherish little sympathy for such sentiments, or respect for such prejudices.  Standing as we do upon the watch-tower of human freedom, we cannot be deterred from an expression of our approbation of any movement, however humble, to improve and elevate the character and condition of any members of the human family.

While it is impossible for us to go into this subject at length, and dispose of the various objections which are often urged against such a doctrine as that of female equality, we are free to say, that in respect to political rights, we hold woman to be justly entitled to all we claim for man. We go farther, and express our conviction that all political rights which it is expedient for man to exercise, it is equally so for woman.

All that distinguishes man as an intelligent and accountable being, is equally true of woman; and if that government is only just which governs by the free consent of the governed, there can be no reason in the world for denying to woman the exercise of the elective franchise, or a hand in making and administering the laws of the land. Our doctrine is, that “Right is of no sex.” We therefore bid the women engaged in this movement our humble God-speed.