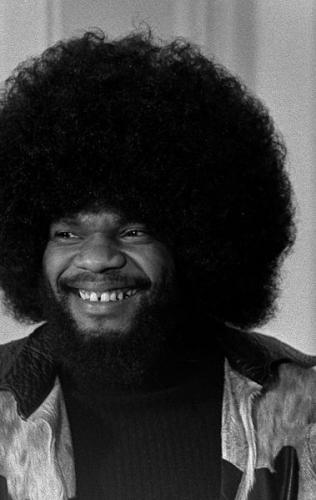 Billy Preston, singer and musician, was born William Everett Preston in 1946 in Houston, Texas.  He lived in Houston, Texas until his family moved to Los Angeles, California in 1949.  Working as Victory Baptist Church’s organist, his mother, Robbie Preston Williams, supported Preston, his sister Gwen Gooden and half sisters Lettie Preston and Rodena Williams.  Influenced by his mother’s music, Preston started to play the organ when he was around four years old.  By the time he was 18, Preston played with prominent musicians, such as the gospel singer Mahalia Jackson, and starred as a young W.C. Handy in St. Louis Blues (1958).  Rock and roll entertainer Little Richard hired 16-year-old Preston to play on his European tour in 1962.  On tour, he met the Beatles, who he would later collaborate with, as well as Sam Cooke, who signed him to SAR Records.

Preston is best known for playing the organ and electric piano.  He also sang and wrote rock and roll, gospel, and rhythm and blues music.  From the 1960s to the 1990s, Preston produced albums such as The Wildest Organ in Town, The Most Exciting Organ Ever, That’s the Way God Planned It, Encouraging Words, Minister of Music, and Words and Music.

Preston also collaborated with the twentieth century’s top musical acts, including Ray Charles, the Rolling Stones, Bob Dylan, Eric Clapton, the Everly Brothers, Aretha Franklin, Gladys Knight, Luther Vandross, Joe Cocker, and the Red Hot Chili Peppers, among others.  His famous long-time collaboration with John Lennon, Paul McCartney, Ringo Starr, and George Harrison earned him the nickname “the Fifth Beatle.” He played with the Beatles in the sessions that eventually produced The Beatles [the White Album], Let It Be, Abbey Road, and “Get Back.”  He also performed with the band on a London rooftop during their final concert together in 1970, which would appear in the film Let It Be.

After the Beatles’ break-up, Preston continued to work with Harrison, Lennon, and Starr on solo projects into the 1980s. Among his other well-known musical contributions, Preston co-wrote “You are so Beautiful” with Bruce Fisher, which he recorded on his 1974 album The Kids and Me.

Starting in the 1960s, various television shows and films featured Preston.  He played with the house band of Shindig. In 1975, Saturday Night Live invited Preston to perform on its first episode.  He also appeared in the film Sgt. Pepper’s Lonely Hearts Club Band (1978), Blues Brothers 2000, and American Idol (2005).

Throughout his career, Preston battled drug problems. In the late 1990s, he served several years in prison for violating probation and insurance fraud.  Preston died in Scottsdale, Arizona, on June 6, 2006, but his musical influence still can be seen today in musical genres ranging from pop to Pentecostal gospel performances.