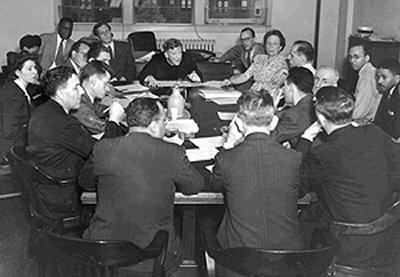 On June 25, 1941, President Franklin D. Roosevelt signed Executive Order 8802, creating a Committee on Fair Employment Practices (FEPC) to investigate complaints of discrimination and take action against valid complaints in any defense industry receiving government contracts. President Roosevelt signed Executive Order 8802 only after A. Philip Randolph, working with other civil rights activists, organized the 1941 March on Washington Movement, which threatened to bring 100,000 African Americans to the nation’s capitol to protest racial discrimination. President Roosevelt signed Executive Order 8802 one week before the proposed March, and in return, Randolph called off the demonstration. However, Randolph continued to fight against discrimination and formed the March on Washington Movement (MOWM) to hold the FEPC accountable.

In 1943, the FEPC was strengthened with Executive Order 9346 granting the FEPC more powers to take action against discrimination by the defense industry. In response, the FEPC budget was increased and a full-time staff was hired. By the end of WWII, African Americans accounted for almost eight percent of defense-industry jobs, and the number of Black Americans working for the federal government more than tripled. While the FEPC was charged with investigating discrimination, job bias continued.  Often, when African Americans were hired, they were segregated within the defense industry, paid less than their white counterparts, and restricted in their ability to join and participate in unions.

At the conclusion of the war, political leaders debated whether the FEPC should continue as a government program. The United States Congress voted against continuing the FEPC in 1946. Two bills were introduced in Congress between 1946 and 1948 calling for the establishment of a permanent FEPC.  Both failed. In 1948, President Truman sent a civil rights package to Congress calling for a permanent FEPC, but Congress refused to pass it. In 1950, the House approved a permanent FEPC bill but Senators from the South filibustered and prevented the bill from passing. The FEPC was never made a permanent government agency.