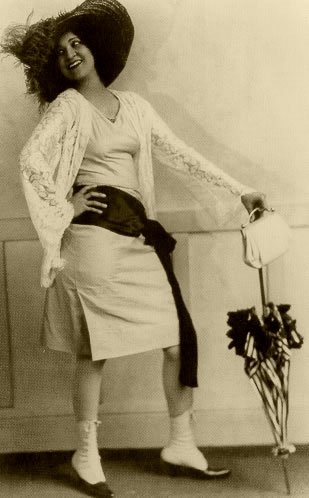 Evelyn Preer, one of the first African American silent screen actresses to transition into sound Hollywood films, was born on July 21, 1896 in Vicksburg, Mississippi. After her father’s death, Preer and her mother relocated to Chicago, Illinois where she completed high school before pursuing acting.

Preer’s big break came when she landed a role in Oscar Micheaux’s first film, The Homesteader (1919), in which she played a tragically unhappy woman abandoned by her husband for a mulatto woman whom he believed to be white. Impressed with her talent, Micheaux cast Preer in several roles in which she generally played dramatic characters, challenging many of the prevailing black film stereotypes. Preer expanded her acting abilities into the area of theater, frequently alternating between the screen and stage as she became a staple for Micheaux’s dramatic films and an esteemed actress for the Lafayette Players.

Preer met and married stage actor Edward Thompson while traveling with the players and the duo headlined productions for the traveling section of the Lafayette Players throughout the early 1920s. Preer’s impressive theatricality led her to Broadway where she recorded with the legendary musical composer Duke Ellington, performed with Ethel Waters, and won acclaim for her role as Sadie Thompson in the revival of Somerset Maugham’s classic melodrama Rain.

By the end of the decade, Preer’s versatility led her to Hollywood where she became a contract player for Paramount Studios. She appeared in productions of The Framing of the Shrew (1928), Melancholy Dame (1928), and Oft in the Silly Night (1928). Although her roles were often uncredited, The Framing of the Shrew became her most notable Hollywood role as she parlayed her comedic and vocal talents into her act. Preer’s career on the silver screen would have perhaps broadened further had she not developed post-parturition complications and died of double pneumonia in November, 1932 at the age of 36, just months after giving birth to her only child, Francesca Sr. Thompson.