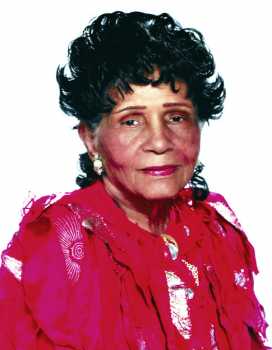 Sarann Knight was born in Eufaula, Oklahoma  on July 22, 1920, to parents of mixed African American and Native American ancestry.  She migrated to Las Vegas in 1942, settling with her husband, Luther Walker, in the Westside African American community.  Preddy first sought employment on Jackson Street, the black business district, and soon became a Keno writer in the Cotton Club.  Preddy moved to Hawthorne, Nevada with her husband and purchased her first gaming venture, a nightclub for blacks offered to her for $600.00.  Borrowing the money from her father, Preddy renamed the enterprise the Tonga Club, and operated it for seven years. With club ownership she became the first black woman to own a gaming license in Nevada.

Sarann Preddy returned to Las Vegas in 1955 and one year later went to work at Jerry’s Nugget as an experiment.  The NAACP had been told that Jerry’s Nugget would hire a black dealer if they could send in a qualified person.  Sarann accepted the challenge, intending to work at the North Las Vegas casino for six months.  She stayed there for seven years.

Preddy went back into business for herself as the owner and operator of The People’s Choice Casino. She then purchased the famed Moulin Rouge in 1989 with her third husband, Joe Preddy.  Since its 1955 opening and closing, the resort had passed through several owners, never realizing the success that it had enjoyed in its heyday.  The problems continued despite Preddy’s best efforts. The Rouge was closed in the late 1990s, and thefamed hotel casino burned to the ground in 2003.

Preddy also ran for the Las Vegas City Council, served on the local NAACP Executive Board, organized the Women’s Auxiliary to the local NAACP branch, and became a founding member of the Las Vegas Barbara Jordan Democratic Club. She was a key leader in the business sorority, Gamma Phi Delta. In 2007, she worked with a group of black women to organize the Las Vegas Black Historical Society.