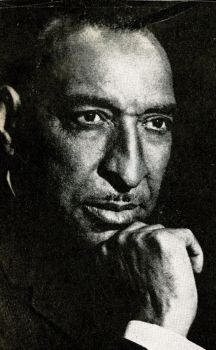 C. B. Powell
Fair use image

Clilan (C.B.) Powell, longtime owner of the Amsterdam News, was born in 1894 to former Virginia slaves.  Very little is known about his childhood.  He received his medical degree in 1920 from Howard University School of Medicine and began his career specializing in x-ray technology.   Powell was the first African American x-ray specialist and owned a laboratory in Harlem.  It was at his lab where he met Dr. Philip H.M. Savory, his future business partner.  The two physicians collaborated to create the Powell-Savory Corporation in 1935.

With this new corporation, they switched their focus from medicine to business, and became two of the leading African American entrepreneurs in the 1930s.  They first purchased the failing Victory Life Insurance Company in 1933 in Chicago, Illinois and revived it to a thriving business.  In 1935 they purchased the Amsterdam News, the largest newspaper in Harlem, for $5,000.  Powell became publisher of the New York paper and retained that post until its sale in 1971.  Powell studied other successful newspapers including the New York Times and patterned the Amsterdam News after them.   He also made the Amsterdam News home for numerous African American journalists such as Earl Brown, Thomas Watkins, James L. Hicks, and Jesse H. Walker.  Powell expanded the paper’s coverage to include national and international news.

In 1944 Powell achieved another first when New York Governor, Thomas Dewey, appointed him the boxing commissioner.   Powell was a lifelong Republican who recognized the migration of most African Americans from the GOP to the Democratic Party.  Nonetheless he also remained cautious of the Democrats, pointing out that they continued to rely on the segregationist Southern wing to win national elections.  During the presidential election of 1944, for example, he endorsed Governor Dewey for President.  Thus throughout these years C.B. Powell politically found himself on the opposite side of Adam Clayton Powell (no relation), who in 1944, was elected to the US Congress to represent Harlem.

Despite his wealth and success, Powell was not immune to racial discrimination.  As one of the most prominent and successful natives of Virginia, Powell received an invitation to attend a ceremony in Richmond to commemorate the state’s 350th anniversary.   The governor of Virginia, Thomas Stanley, upon learning that Powell was African American, rescinded the invitation, creating an international scandal.

By the 1960s the Amsterdam News had become the nation’s leading black newspaper due to its extensive coverage of the civil rights movement in the South and the growing Black Nationalist sentiment in Northern communities.  Malcolm X, for example, wrote a column for the newspaper titled “God’s Angry Man.”

In 1971 Powell sold the Amsterdam News to the Amnews Corporation, a group of African American investors, for $ 2.3 million dollars.  He later sold the chain of funeral homes he had founded in the early 1950s.  Facing an incurable disease, Powell committed suicide on September 22, 1977, at the age of 83.  A year later it was revealed that Powell left $ 2.5 million dollars, about half of his estate, to Howard University, which at the time was the single largest gift to an African American college or university.  He also left $50,000 to the NAACP Legal and Defense Education fund.