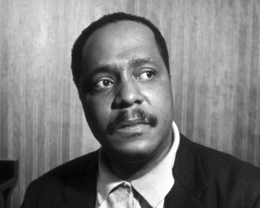 Bud Powell, jazz pianist, was born Earl Powell in New York City.  His father, William Powell, worked as a building superintendent. Powell grew up surrounded by musicians, including his father, who played piano, his brother William, who played trumpet and violin, and his brother Richie, who also played piano. Powell started to learn piano from his father at age three and began taking professional lessons at age six. These early years exposed Powell to a variety of musical influences, including Ludvig van Beethoven, Frederic Chopin, Robert Schumann, and Johann Sebastian Bach as well as Fats Waller, Art Tatum, Teddy Wilson, and Billy Kyle.

At fifteen, Powell quit Bronx’s DeWitt Clinton High School to play music.  He joined his brother William’s band and began playing at the Chicken Coop Restaurant in Harlem, the Palace in Greenwich Village, and Minton’s Playhouse. Pianist Thelonious Monk influenced Powell’s developing musical style and helped introduce him to New York’s music crowd and major jazz venues. Powell would later record many of Monk’s compositions.  In 1943, Powell joined Charles “Cootie” William’s big band and he started to make records.  In 1945, he played with Dizzy Gillespie and Charlie Parker as the Three Deuces.  Some of Powell’s key recordings include Hallucinations, Dance of the Infidels, Tempus Fugue-it, Bouncing with Bud, and The Glass Enclosure.  His records and live music sessions earned him a reputation as one of bebop’s most important pianists.

As he started to make a name for himself in the music world in the 1940s, Powell struggled with alcoholism and mental illness, which limited Powell’s live performances.  New York City Police officers beat Powell in a racially charged conflict in 1945 that many believed contributed to his mental issues.  Between 1945 and 1955, Powell was sent to mental institutions five times.  In March 1953, Powell married Audrey Hill, with whom he had one child, Celia Powell. In 1954, he started living with Altevia “Buttercup” Edwards.  Edwards later became Powell’s manager.  Powell continued to play and record sporadically.   He joined Dizzy Gillespie’s second big band and played during Charlie Parker’s final performance.

In 1959, Powell moved to Paris, France, where he met Frances Paudras, who would later write about their friendship. While in Europe, Powell contracted tuberculosis, which exacerbated his worsening health issues.  He returned to New York in 1964 where he made a few appearances between 1964 and 1966.  Earl “Bud” Powell died of tuberculosis, malnutrition, and alcoholism in New York City in 1966.  Several thousand people viewed his Harlem funeral procession.