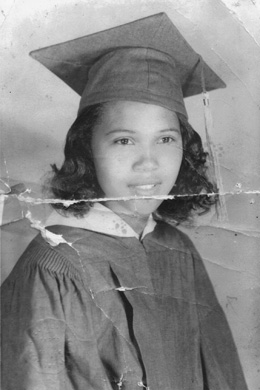 Barbara Rose Johns Powell was an American civil rights leader.  She is best known as the student who, at the age of sixteen, led a student strike at Robert Russa Moton High School (now Robert Russa Moton Museum) in Farmville, Prince Edward County, Virginia on April 21, 1951. The strike led the National Association for the Advancement of Colored People (NAACP) to file a lawsuit, Davis v. Prince Edward County, which would become one of the five cases that led to the 1954 Brown v. Board of Education Supreme Court decision.

Johns was born on March 6, 1935, in New York City, New York to Robert and Adele Violet Johns who were both from Prince Edward County, Virginia. Johns was the oldest of five children. When World War II began her father joined the United States Army while her mother took her and her siblings back to Prince Edward County, Virginia to live with her grandmother, Mary Croner. Barbara Johns worked on the family tobacco farm and in a country store owned by her uncle, Vernon Napoleon Johns, who was an outspoken minister and civil rights activist.

The strike began when Johns, who was sixteen at the time, was a junior at all-black Moton High School. Johns became frustrated when the county school board refused to build a new high school for black students or desegregate the white high school. Moton High, built in 1939, could hold only 200 students and because of the overcrowding, classes were held in school buses and the auditorium. When parents of the students appealed to the school board for a new school, the board responded by putting up several tar-paper shacks as a stop-gap measure to accommodate the overflow of students. Johns then met with several students who decided to start a strike.

Johns and other students decided to lure school principal M. Boyd Jones away from the high school by reporting that some Moton students were downtown causing trouble. After Jones left the building, Johns called student leaders to the auditorium where she described her plans for a strike to protest conditions at Moton High.  The students agreed to support the strike.

The strike lasted two weeks. After it began two Virginia NAACP leaders, Spottswood Robinson and Oliver Hill, filed a lawsuit at the federal courthouse in Richmond, Virginia to force school board officials to address the overcrowding by integrating the white high school or building a new facility. The case, Davis v. Prince Edward County, became one of five cases nationwide that formed the basis for the 1954 Brown v. Board of Education decision by the U.S. Supreme Court which desegregated all school across the nation.

Fearing for her safety, however, John’s parents sent her to Montgomery, Alabama to live with her uncle, Vernon Johns and to her complete her education. After graduating from high school in Montgomery, Johns attended Spelman College in Atlanta, Georgia and graduated from Drexel University in Philadelphia, Pennsylvania in 1979.  She later became a librarian in the Philadelphia Public Schools and married William Powell. The couple had five children together.

Barbara Rose Johns Powell died in Philadelphia on September 25, 1991 at the age of 56.