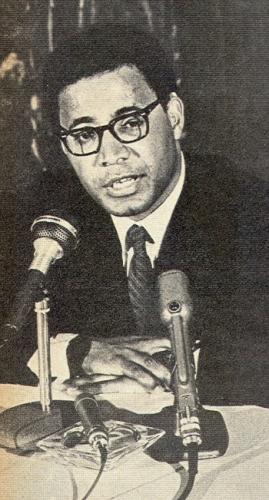 Alvin Poussaint was born in East Harlem in New York City on May 15, 1934.  After graduating from Stuyvesant High School he received a Bachelor’s degree from Columbia College in 1956 and an M.D. from Cornell University in 1960.  Poussaint completed his postgraduate training at the University of California at Los Angeles (UCLA) Neuropsychiatric Institute, where he served as the chief resident in psychology from 1964 to 1965.   Between 1965 and 1967 Poussaint was the southern field director of the Medical Committee for Human Rights in Jackson, Mississippi.  With this organization Poussaint provided health care to civil rights workers and also worked on the desegregation of health care facilities throughout the South.  After leaving Mississippi he became an assistant professor at Tufts University Medical School.  Here he was the director of a psychiatry program in a low-income housing development.  Dr. Poussaint began teaching and researching at Harvard Medical School in 1969.

Dr. Poussaint’s research interests include studies on the nature of grief, self-esteem, parenting, violence and the social adaptation of children of interracial marriages.  His first book, Why Blacks Kill Blacks (1972) explores the effects of White racism on Black psychological development.  He has also co-authored two other books, Raising Black Children and Lay My Burden Down, as well as numerous articles in professional journals.

From 1984 to 1993, Dr. Poussaint was the consultant for two popular television series, The Cosby Show and a Different World.  Poussaint ensured that these shows stayed away from negative stereotypes and presented a positive image of Blacks to the audience.   In 1997 Poussaint won a New England Emmy for Outstanding Children’s Special as the co-executive producer of Willoughby’s Wonders.