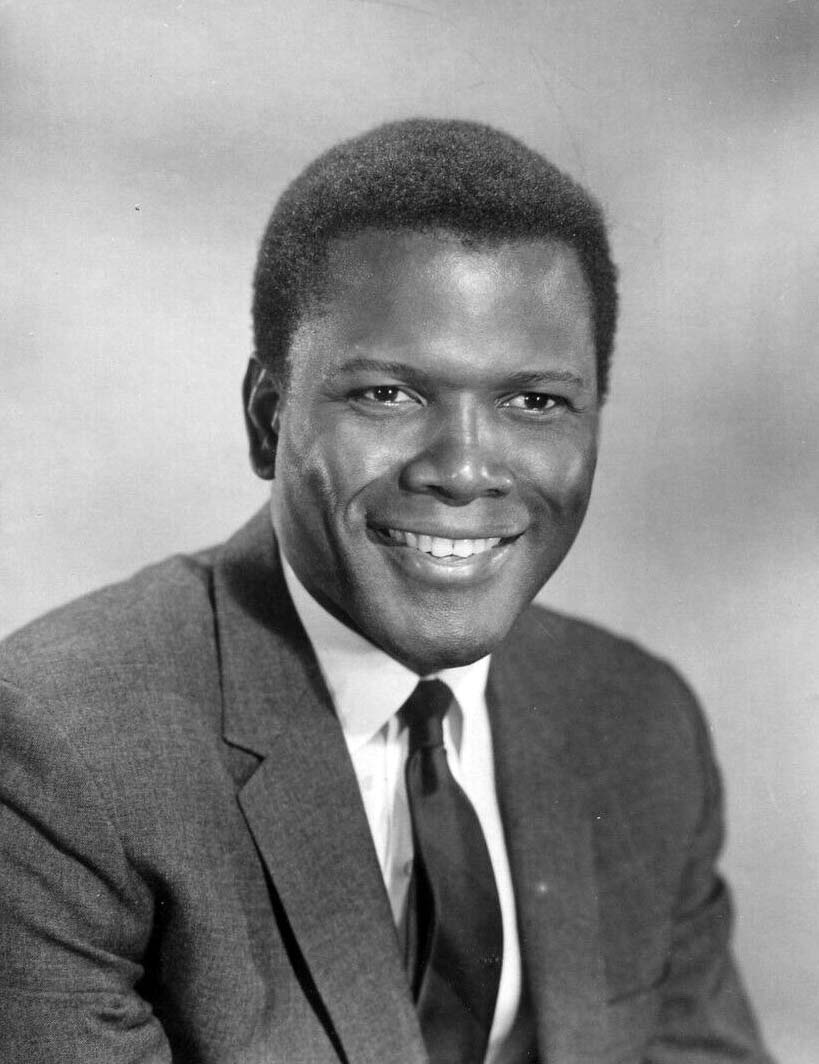 Award winning actor, director, and author, Sidney Poitier broke racial barriers and stereotyping in the film industry to become one of the leading African American actors of the 20th Century. In a career that spanned 57 years, Poitier was a featured performer or starred in 48 films and directed six.

Sidney Poitier was born on February 20, 1927 in Miami, Florida to Bahamian parents, Evelyn Outten Poitier and Reginald James Poitier, who traveled from their farm on Cat Island, the Bahamas to Miami to sell their produce. Although he was born in Florida, he spent his childhood in The Bahamas on Cat Island, an island with a population of 4,000 and no electricity. At the age of fifteen, Poitier moved to Miami to live with his older brother. Two years later, Poitier relocated to New York City, where he was arrested for vagrancy and thrown out of his apartment for not paying his rent. After this brush with the law, Poitier joined the US Army in 1945.

Poitier’s first role was a small part in a Broadway production of Lysistrata. He received great reviews, and by the end of 1949 Poitier was given the opportunity to star in films.  In 1950, Poitier made his film debut in No Way Out, where he played a doctor who treats a white bigot. In 1951, he played a South African minister and political activist in Cry, the Beloved Country. In 1955, Poitier played a troubled teenager in Blackboard Jungle although at the time he was 27. Three years later, Poitier was nominated for an Academy Award and a Golden Globe for his co-starring role in The Defiant Ones with Tony Curtis.

In 1961, Poitier received a Golden Globe nomination for his role in the film version of A Raisin in the Sun. In 1963, however, Poitier made history by being the first African American Male to win the Academy Award for Best Actor in a Leading Role for Lilies of the Field.  (James Baskett received a Special Academy Award in 1948 for his performance as Uncle Remus in the Walt Disney production Song of the South.) Poitier also won a Golden Globe Award for Lilies of the Field.

Following his Academy Award win, Poitier continued to land major film roles. In 1965, he co-starred in The Bedford Incident and A Patch of Blue. Two years later, he starred in three major films. Guess Who’s Coming to Dinner co-starred Spencer Tracy and Katherine Hepburn and explored the controversial subject of interracial marriage. Later that year, Poitier co-starred with Rod Steiger in the film, In the Heat of the Night. Poitier’s character, Philadelphia detective Virgil Tibbs, was forced to assist Stieger’s character, a bigoted Mississippi sheriff, solve a homicide. Steiger won an Academy Award for Best Actor while the film was the Best Picture of the year.

By the early 1970s Poitier began directing films, including Stir Crazy, starring Richard Pryor and Gene Wilder. He also directed and starred in Buck and the Preacher alongside Harry Belafonte. In 1974 Poitier starred in and directed an all-star cast, that included Belafonte and Bill Cosby, in Uptown Saturday Night.

In 1950 Sidney Poitier married Juanita Hardy, a model and dancer; they remained married for 15 years and had four children. In 1976, he married Joanna Shimkus, a Canadian-born actress and former co-star. Poitier received numerous honors and accolades.  In 1974 he was knighted by Great Britain’s Queen Elizabeth and from that point known as Sir Sidney Poitier.  In 1992 he received an American Film Institute Life Achievement Award. In 1995 he received a Screen Actors’ Guild Lifetime Achievement Award. In April 1997, Poitier, still a citizen of the Bahamas, served as that nation’s ambassador to Japan. In 2001 he received a Grammy Award for Best Spoken Word Album for his work on The Measure of a Man. That same year Poitier received an Honorary Academy Award for his achievements in acting for over a half a century.  In 2006 he received a British Academy of Film and Television Fellowship and in 2009 he received the Presidential Medal of Freedom from President Barack Obama in a White House ceremony.

Sidney Poitier passed away January 6, 2022 in the Bahamas. He was 94 years old. He is survived by his wife Joanna their daughters, Anika and Sydney Tamila, as well as daughters Beverly, Paula, and Sherri from his first marriage.