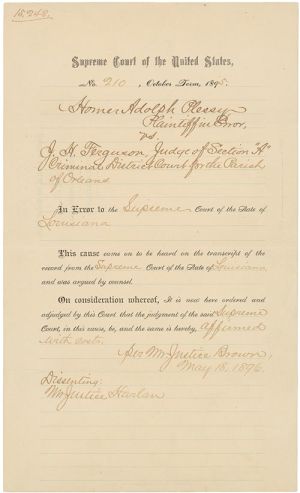 Plessy v. Ferguson (1896) was the seminal post-Reconstruction Supreme Court decision that judicially validated state sponsored segregation in public facilities by its creation and endorsement of the “separate but equal” doctrine as satisfying the Constitutional requirements provided in the Fourteenth Amendment to the United States Constitution. The decision was 7-1 with one abstention by Justice John Marshall Harlen, whose lone dissent earned him the nickname, “the Great Dissenter.”  It wasn’t until Brown v. Board of Education (1954) that this “separate but equal” doctrine was abolished.

Homer Plessy was born a free man and, going by the American South’s prevailing “one drop rule,” described as an “octoroon” (i.e., one-eighth black). Legally classified as black, Plessy boarded a “whites-only” car on the East Louisiana Railroad. Segregated rail cars were allowed due to an 1890 Louisiana statute mandating separate railroad accommodations for whites and blacks, which included separate railway cars. The advancement of the railroads brought the first attempt at state segregation laws, although there was some resistance to this because of the interstate commerce nature of railroads. The East Louisiana railroad, however, ran exclusively within the state borders of Louisiana, allowing the state’s segregation law to apply unconditionally. When Plessy refused a request to take a seat in the “colored only” section, he was removed, arrested, charged, and ultimately convicted. The circumstance was planned as a test case by the Committee of Citizens, a local New Orleans group of people of color. The railroad was pre-advised of Plessy’s race status. Notably, the facilities were, contrary to many public facilities, comparable in quality for both races.

Plessey’s conviction was sustained through the state courts and ultimately found its way to the United States Supreme Court. Plessy argued the statute violated both the Thirteenth Amendment, abolishing slavery, as well as the Fourteenth Amendment, contending that the reputation of being white was a form of “property” and that the state, by declaring Homer Plessy non-white, denied his property rights and implied the inferiority of the Negro race.

The majority of the Court rejected the view that the Louisiana law implied any inferiority of blacks. Instead, it contended that the law separated the two races as a matter of public policy. Justice Brown wrote, “We consider the underlying fallacy of the plaintiff’s argument to consist in the assumption that the enforced separation of the two races stamps the colored race with a badge of inferiority. If this be so, it is not by reason of anything found in the act, but solely because the colored race chooses to put that construction upon it.”

The Plessy decision legitimized segregation practices begun earlier in the South and provided a legal framework for additional segregation laws throughout the rest of the nation. As a consequence of the Plessy decision, many of the rights blacks won at both the state and federal level during the Reconstruction Era were erased through means of the “separate but equal” doctrine. Despite the Supreme Court’s faith in “separate but equal,” Southern state governments refused to provide blacks with genuinely equal facilities and resources in the decades following the Plessy decision.