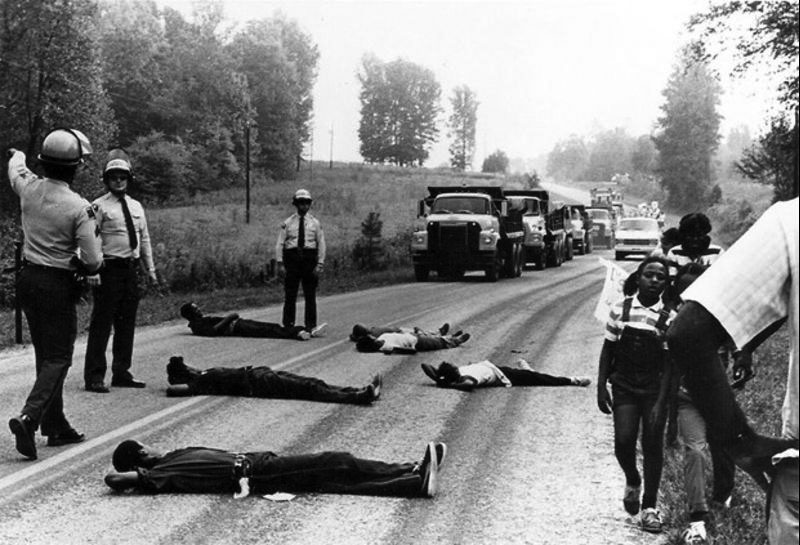 Founded in 1779, Warren County, North Carolina, is the birthplace of the environmental racism movement. In 1982 members of the predominantly Black population of Warren County, situated on the North Carolina border with Virginia, began protesting the decision by the State of North Carolina to establish the Warren County PCB Landfill that would bury well over a hundred thousand yards of soil contaminated by polychlorinated biphenyl. At the time 64% of the population of the County was African American, while the town of Afton beside the proposed landfill site was 75% Black. Warren County at the time was home to roughly 16,000 residents.

The landfill opening spurred the local branch of the National Association for the Advancement of Colored People (NAACP) to stage a series of demonstrations that resulted in the arrests of over five hundred protesters including many for lying down to block trucks from delivering toxic materials to the site. Among the arrested protesters were Reverend Dr. Benjamin Chavis Muhammad, a member of the United Church of Christ and a prominent civil rights activist, and Walter Fauntroy, the non-voting U.S. representative from Washington D.C. in Congress. These demonstrations marked an expansion of civil rights protests from voting rights or the end of school segregation to include marches about hazardous waste facilities affecting the health of African Americans.

Media coverage of the ongoing protests raised national and eventually international awareness about the Warren County situation and more generally about the locating of hazardous waste landfills near poor, rural, and mostly Black and brown communities across the nation without input and sometimes without the knowledge of residents. These incidents, starting with Warren County helped generate the national environmental justice movement.

That movement was marked by the growth of studies almost all of which reached the same conclusion, that the race of the nearby residents was the most significant factor in determining the location of a hazardous waste facility. These studies reinforced the credibility of environmental racism and revealed a dark, dangerous, and subtle side of racism in the United States that few had recognized.

In 1987, the United Church of Christ issued a report describing the health and environmental threats that hazardous chemical sites posed to nearby communities. The report exposed the U.S. government’s role in disregarding the well-being of marginalized communities through its support of the disposal of hazardous waste near them. In 1990, sociologist Robert Bullard published Dumping in Dixie: Race, Class, and Environmental Quality, the first book which discussed the environmental struggles of various Black communities across the nation and echoed the claims of preceding studies that race was the most important factor in determining the siting of hazardous waste facilities.

As the movement gained traction, local Black communities became increasingly successful in getting action by the federal government, and in 1994, President Bill Clinton signed Executive Order 12898, Federal Action to Address Environment Justice in Minority and Low-Income Populations. The executive order required the federal government to document and confront the impacts of hazardous waste sites upon Black and brown communities. Meanwhile, the Warren County PCB Landfill, which sparked the initial protests in 1982, was finally cleaned up and closed in 2004.