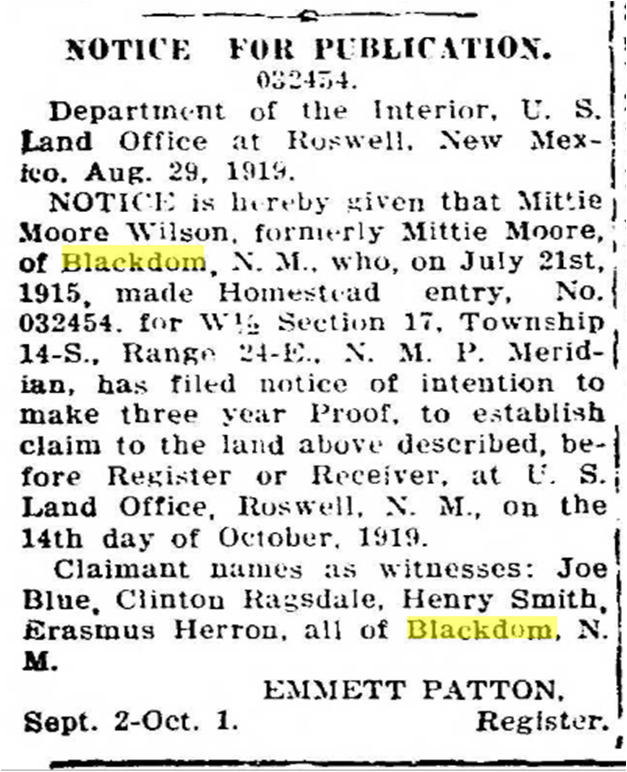 Blackdom Oil Company started in 1919 during the Red Summer which marked a year of nationwide violence against Black people. That year Blackdom, New Mexico’s only all-black town, entered into contracts with National Exploration Company and Mescalero Oil Company. Oil was first discovered in southeastern New Mexico in 1907, earning the region the nickname “Little Texas,” but the first successful commercial wells began producing in 1922.

In 1919, Blackdomites benefited from the speculation bubble that occurred before the first well was drilled when some of its citizens incorporated the Blackdom Oil Company. Prominent families in the community including the Boyer, Ragsdale, Eubank, Gates, and Collins families agreed to deposit their land with the Roswell Picacho Investment Company to open it to oil exploration.

Blackdom began in September of 1903 when 13 African American men, led by Isaac Jones and Frank Boyer incorporated the townsite company. The early years were plagued with droughts in a dry-farming agricultural society. By 1918, for those slow to prove-up land, prospects for an oil boom in the region increased their urgency to prove-up (gain control) over their homesteaded lands.

Two women were prominent in these efforts in 1919. Ella Boyer was the first to take advantage of the speculation, completing her patent on 160 acres adjacent to Blackdom’s 40-acre townsite (land earlier patented by her husband Frank). Later that year Mittie Moore Wilson homesteaded a square mile of land three miles south of Blackdom. Moore was a bootlegger who ran a house of prostitution twenty miles north of the town and was one of the area’s wealthiest citizens.

In January of 1920, Blackdomites announced in the Roswell Daily Record, “Will Drill at Blackdom,” inviting wildcatters and other oil speculators to participate in the boom that promised riches for Blackdomites who had lands made available for oil drilling. The flurry of advertisements for Blackdom Oil peaked in the summer that year as local residents signed contracts with oil exploration companies from New York to California. On September 1, 1920, The Roswell Daily Record reported that an unidentified California syndicate had “Made Location at Blackdom.” How many wells and barrels were produced by Blackdom’s enterprise is currently lost to history.

During the 1920s, the town itself withered even as Blackdomites in the region garnered oil royalties. Eustace and Francis Boyer Jr., of the Boyer family, were a part of a World War I cohort of returning soldiers who proved-up homesteads for the oil boom. Their father Frank Boyer, however, left Chaves County where Blackdom was located, and resettled in Vado, Doña Ana County, New Mexico in 1920. The Ragsdale family, however, stayed and profited from the windmills they constructed on nearby homesteads and the oil revenue they gained from the well on their land.

By 1930—and the start of the Great Depression—Blackdom ceased to exist. Blackdom Oil, however, continued to produce royalties for prominent black families in the area. Local newspapers reported in 1930 that the Blackdom Oil Company drilled exploration wells at least 1,600 feet deep.  Frank Boyer, in a 1947 interview, said that royalty payments to Blackdomites flowed well into the post-World War II era.