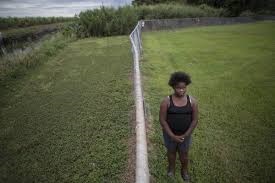 Located in Palm Beach County, Pahokee, Florida is a small city with a population of approximately 6,269 people. Every October, residents of Pahokee witness the fall of “black snow.” The “snow” is a sooty byproduct of the agricultural practice of burning the sugar cane fields before harvesting. The resulting high level of pollution dramatically impacts the predominantly Black and low-income community (59% Black, 30% Hispanic) with pervasive cases of asthma, as well as other respiratory and immune system illnesses. In addition to polluting the air, the sugar industry in Pahokee has polluted local lakes, Lake Okeechobee in particular, thus decreasing access to clean water, endangering local wild and marine life, and decreasing property values.

In 2015, the US Education Department funded a study that found that areas such as Pahokee, which are exposed to frequent and large-scale burning, endure higher levels of respiratory illnesses. In 2020, the U.S. Centers for Disease Control and Prevention suggested a temporary ban on agricultural burning. Despite the CDC recommendation, U.S. Sugar, a prominent sugar company in Florida, continues to engage in agricultural burning and contends that the company uses safe methods that are highly regulated. Although more environmentally friendly options are tangible, the switch to green harvesting would dampen the economic gains of U.S. Sugar. The vast majority of the African American and Hispanic populations in Pahokee are strongly against agricultural burning due to the detrimental health effects and value the local economy far more than that of large corporations such as U.S. Sugar that pollute their communities.

Approximately 70% of hazardous waste sites in the U.S. are located near low-income communities, communities of color, which also happen to be most vulnerable to climate change-related events. The consequences of hazardous waste siting are detrimental to the health and lifestyle of these communities and are evident across the nation with high levels of childhood asthma, COPD, cancer, and various other illnesses due to pollution and environmental racism.

Green harvesting, where sugar cane is harvested without burning, is a viable alternative that will improve the overall health of Pahokee residents and could lead to other areas in the U.S. simulating such practices. The Sierra Club of Florida, working with local activists, has proposed an anti-burn campaign to encourage farmers to switch to green harvesting. In June of 2019, a class-action lawsuit was filed against several sugar companies in the area, U.S. Sugar included. The attempts to alleviate the health effects of agricultural burning in Pahokee or ongoing with residents using their collective political voice to battle pollution.