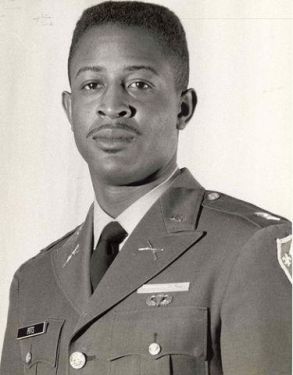 Riley Leroy Pitts was a United States Army captain and the first African American officer to receive the Congressional Medal of Honor.  President Lyndon B. Johnson presented the medal posthumously in 1968 for his exceptional heroism during the Vietnam War.

Pitts was born on October 15, 1937 in Fallis, Oklahoma.  He attended Douglass High School in Oklahoma City.  He earned a bachelor’s degree in journalism from Wichita State University in 1960 and worked briefly for the Boeing Corporation in Wichita prior to joining the army.  While he was with Boeing, he married his wife, Eula, and the couple had two children, Stacie and Mark.  Pitts joined the army in 1960 and was later commissioned as an officer.  In December 1966, he was sent to fight in Vietnam.

Pitts first served as an information officer when he arrived in Vietnam.  He was later transferred to the combat unit, C Company “Wolfhounds,” 2nd Battalion, 27th Infantry Regiment, and served as C Company commander.  On October 31, 1967, only a month prior to his scheduled return home, Pitts’s unit was ordered to reinforce another company in Ap Dong, Vietnam.  Against strong Viet Cong forces, Pitts led an assault and overran the enemy’s position.  When ordered to move further north, the unit faced even more heavy fire from three directions.  He threw a grenade taken from a captured Viet Cong soldier’s gear towards an enemy bunker, but it hit the jungle foliage and bounced back.  Immediately, Pitts threw himself on top of the grenade in an effort to protect his unit, but fortunately it failed to explode.  He then continued to lead his unit forward towards enemy lines until he was killed in the middle of gunfire.

On December 10, 1968, President Johnson presented the Congressional Medal of Honor to Pitts’s wife, Eula, and his children.  His parents also attended the presentation ceremony.  In his speech, President Johnson said, “What this man did in an hour of incredible courage will live in the story of America as long as America endures, as he will live in the hearts and memories of those who loved him. He was a brave man and a leader of men. No greater thing could be said of any man.” Pitts was buried at the Hillcrest Memory Gardens in Spencer, Oklahoma.

There are several naming dedications in honor of Pitts, including a classroom at his alma mater, Douglass High School, a firing range at the U.S. Army base in Fort Sill, Oklahoma, and the main street at the U.S. Army base in Mannheim, Germany.  Captain Pitts’s son, Mark became active with the organization “Sons and Daughters In Touch” (SDIT), a support organization for children of the fallen soldiers of the Vietnam War.  Mark later traveled to Vietnam to dedicate a memorial to his father.