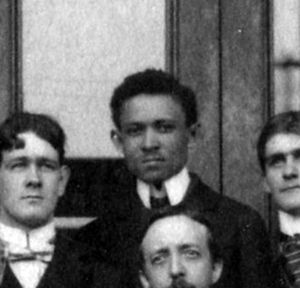 William Sidney Pittman was a noted black architect and advocate for civil rights. Working in both Washington, D.C. and Dallas, Texas, Pittman made significant contributions to each city’s physical and cultural landscape while also paving the way for more African Americans to become architects.

Pittman was born on April 21, 1875 in Montgomery, Alabama and educated in segregated public schools. As a young man he worked for his uncle, who was a carpenter. This would be a trade that would help sustain him later in life. In 1892 at the age of 17, he enrolled at Tuskegee University. While at Tuskegee he studied mechanical and architectural drawing. Pittman graduated in 1897 and then, with the support of Booker T. Washington, continued his education at the Drexel Institute in Philadelphia, Pennsylvania. He graduated from Drexel in 1900 with a diploma in architectural drawing.

After finishing his schooling he returned to the Tuskegee Institute and worked from 1900 to 1905 as the head of the department of architectural drawing. He also taught as an assistant professor in the Division of Architectural and Mechanical Drawing.

Pittman moved to Washington, D.C. in May of 1905. He started out as a draftsman for the architect John Anderson Lankford, but opened his own office in October of that same year. His office, located at 494 Louisiana Ave NW, was the first office opened in the United States by an African American architect. The first building he was commissioned to design was the Trinity AME Zion church on Morton Street in Washington, D.C. In 1906 Pittman was awarded the contract to design the Negro Building at the Jamestown (Virginia) Exposition which marked the upcoming 300 year anniversary of the first permanent European settlement on the North American mainland.

In 1907 Pittman married Portia Marshall Washington, the daughter of Booker T. Washington. The couple settled in the upscale African American community of Fairmount Heights, Maryland where they had and raised three children. For the rest of his time in Washington, D.C. he designed many prominent buildings, including the Garfield Elementary Public School and the 12th Street Young Men’s Christian Association Building.

In 1912 he moved his family to Dallas, Texas where he kept working as an architect and continued to design many notable buildings including the Pythian Temple. By the 1920s, however, he began to have trouble securing work partly due to creative frustrations and partly due to the rigid pattern of racial segregation in the Texas city.  His wife separated from him in 1928 and returned to Tuskegee. Pittman stayed in Texas, but was unable to keep his architecture business going. During the 1930s he worked as a carpenter and published the weekly paper The Brotherhood Eyes. He died in Dallas on March 14, 1958.