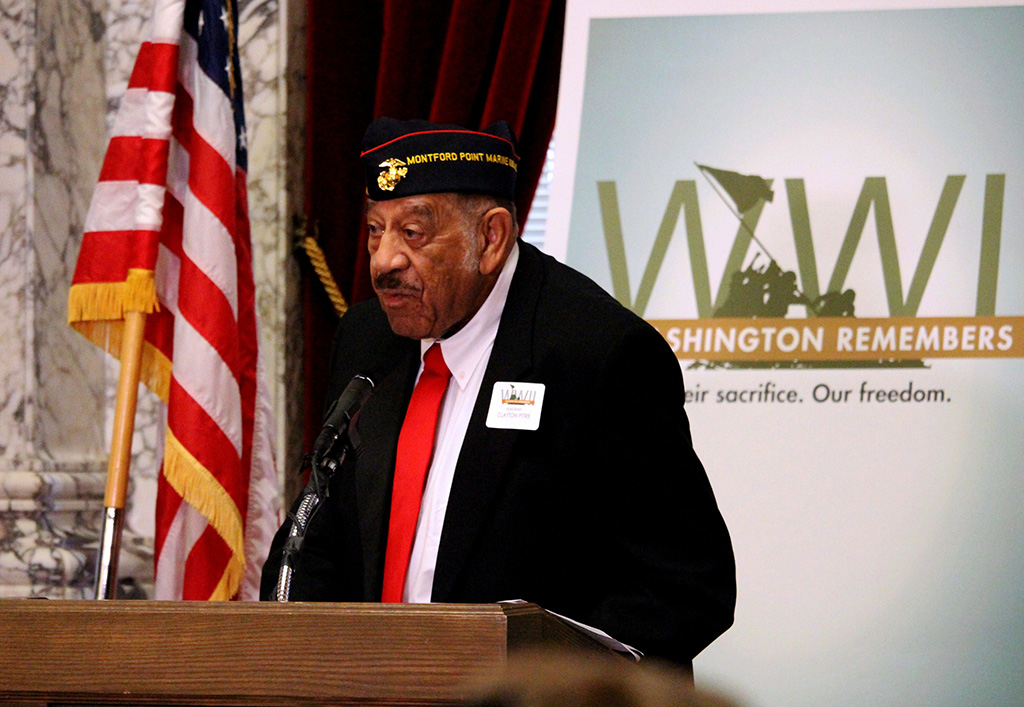 Born on June 30, 1924, to Gilbert Pitre and Eugenie Lemelle, Clayton Pitre was the fourth child of seven siblings. He was born and raised in Opelousas in Saint Landry Parish, Louisiana. His father was a cotton and yam farmer, and his mother was a homemaker.  Pitre attended Catholic schools until the ninth grade when he gave up his education to work in various defense plants in early World War II Texas.

Nineteen-year-old Pitre was drafted into the military in 1943. He subsequently signed up to become one of the first African Americans to join the U.S. Marine Corps and was trained at Camp Montford Point, a segregated facility near Jacksonville, North Carolina. In December 1943, he was sent to Saipan, located in the Northern Mariana Islands. In early 1945 his unit was sent to Okinawa, Japan as a decoy for the other forces that invaded the south end of the island. Pitre was as an infantryman in the 1st Marine Ammunition Company sending ammunition to the front lines. By the end of the war, he had earned his corporal stripes.

Immediately after World War II, Pitre was sent to China to oversee the evacuation of the Japanese Army. In January 1946, he returned to the U.S. and was honorably discharged on February 8, 1946. After a short time back in Louisiana, Pitre was persuaded to join one of his brothers in Seattle, where he got a job at the U.S. Navy’s Fort Lawton. Pitre later enrolled at Seattle’s Broadway Edison Technical School in a program specifically for military veterans who had not earned a high school diploma. With support from the G.I. Bill, he passed his vocational tests.

In 1958, Pitre married Gloria Tony, a Seattle language teacher. The couple had three children: Clayton Jr., Michael, and Paul. He later enrolled at Seattle University and graduated in 1968 with a degree in accounting. Throughout college he worked as a postal clerk and was active in the Seattle chapter of Kappa Alpha Psi Fraternity. For fourteen years Pitre worked at the post office, sold real estate, and later became a the Chief Housing Developer for CAMP. In this position, he worked closely with the First AME Church and the Urban League to help fund and build low-income housing across the city.

When CAMP funding ended in 1973, Pitre joined the Veterans Administration office in Seattle, working there for eleven years until his retirement in December 1984. He continued his community involvement with Kappa Alpha Psi Fraternity, the Knights of Columbus, and the African American Dollars for Scholars program.

On June 26, 2012, Pitre was among 400 black Marines honored by President Barack Obama at a White House ceremony where each received a Congressional Gold Medal.  They are the survivors of the nearly 20,000 black Marines who trained at Montford Point between 1942 and 1949. Pitre enjoyed his retirement, continued to be an avid jazz enthusiast, and resided in Seattle, Washington until his death at 96 on December 31, 2020.