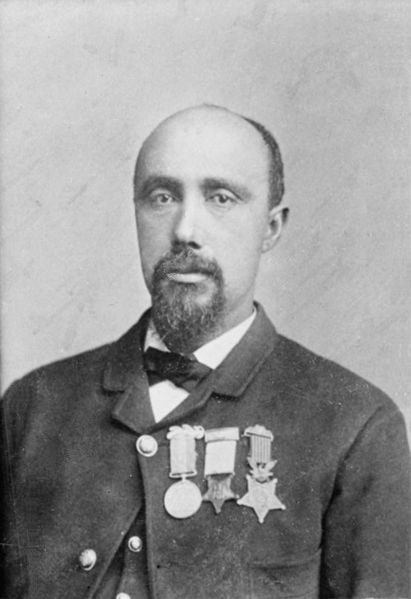 Robert A. Pinn, attorney, and Civil War hero, received the Congressional Medal of Honor from President Abraham Lincoln in 1865.  Pinn was born free to William and Zilphia Broxton-Pinn, in Stark County, Ohio on March 1, 1843.  His father William Pinn escaped from slavery and fled to Ohio at the age of eighteen.  He worked on farms for several years before marrying Zilphia Broxton, a white resident of Stark County.  Pinn and his nine siblings were born on the family farm in Stark County.  He married Emily J. Manzilla, in 1867, and the couple had one child, a daughter, Gracie Pinn-Brooks.

Pinn attempted to join the Union Army at the beginning of the Civil War but was blocked from enlisting because of his race.  He joined the 19th Ohio Infantry in 1861 as a civilian worker, marched south with the regiment, and despite his non-military status, fought at the Battle of Shiloh in Tennessee in 1862.  Afterwards he fought in several other engagements although not an enlisted soldier.  President Abraham Lincoln authorized the use of African American troops in combat after issuing the Emancipation Proclamation on January 1, 1863.  Pinn then joined the 5th United States Colored Troop (USCT), Infantry Regiment (also known as the 127th Ohio Volunteer Infantry) in Massillon, Ohio, on September 5, 1863.

Because of his combat experience, Pinn was promoted to Sergeant on October 18, 1863, just over a month after he joined the regiment.  He was promoted to First Sergeant on September 1, 1864.  Pinn received the Medal of Honor for his heroic action at The Battle of New Market Heights near Richmond on September 29, 1864.  He took command of his company after all the officers had been killed or wounded.  President Abraham Lincoln awarded him the Medal of Honor on April 2, 1865.

Pinn mustered out of service at Carolina City, North Carolina, on September 20, 1865 and returned to Stark County, Ohio.  He studied at Oberlin College from 1874 to 1877.   He then taught school in Cairo, Illinois, and Newberry, South Carolina.  He returned to Ohio and Oberlin where he completed his law studies, and was admitted to the Ohio Bar in 1879, becoming the first black lawyer in Massillon County.

Pinn had a distinguished career as an attorney and a Pensions and Claims Agent for the U.S. Pension Bureau.  He was active in the Republican Party where he served as a delegate to the 1891 Ohio convention that nominated William McKinley for governor.  Pinn was the first African American Commander of Hart Post 134 of the Grand Army of the Republic and remained active in the GAR, until his death on January 1, 1911.

Selby Kelly, The Life of a USCT Veteran in Ohio: Robert A. Pinn’s Quest
for Citizenship, Paper presented at the 94th Annual Convention of the
Association for the Study of African American Life and History,
Cincinnati, Ohio, Sep 30, 2009