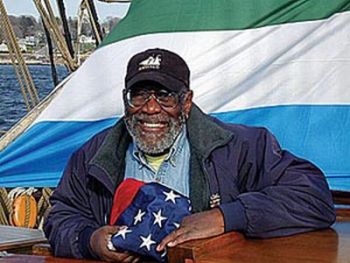 William “Bill” Pinkney is the first African American, and only the fourth person in the world to circumnavigate the globe alone by boat. Pinkney was born on September 15, 1935, in Chicago, Illinois to Marion Henderson Pinkney and William Pinkney, Sr.  He attended Tilden Tech High School in Chicago, and after graduating received training as an x-ray technician.

After high school Pinkney had a variety of different jobs. He was on active duty in the Navy from 1956 to 1960 as a hospital corpsman.  He decided to move to Puerto Rico after leaving the Navy and while there held a series of jobs including one as a professional limbo dancer.  Eventually he hired on to work as a crewman on sailboats.  Pinkney then moved to New York, trained to become a make-up artist and eventually landed a job at Revlon, the cosmetics company.  From there he moved back to his hometown of Chicago to work for the Johnson and Johnson Company.   By 1980, however, Pinkney was an employee of the city of Chicago.

Despite the variety of jobs, Pinkney continued his interest in sailing that he had developed in Puerto Rico and became particularly adept at sailing alone. At the age of 50, after thinking about the legacy he would leave behind for his two grandchildren, April and Brian Walton, Pinkney decided he would attempt to sail around the world alone to encourage them to think and do the impossible. After receiving funding from the industrialist Armand Hammer and a Boston law firm, Aldrich, Eastman, and Waltch, he began to plan his solo voyage.

At the age of 55 Pinkney began his odyssey on August 5, 1990, setting sail from Boston Harbor. He sailed on a 47-foot boat called The Commitment, which had been specially rigged so one man could operate it. Out of all the possible routes, Pinkney chose the most difficult one, which would take him around the five capes. He made stops in Bermuda, Brazil, South Africa, Tasmania, and finally around Cape Horn (the most difficult part of the voyage). His voyage took him 22 months, including a six month delay in Australia due to weather, and covered 27,000 miles.

After successfully completing the voyage, Pinkney worked for a time as a motivational speaker.  Then in 1999 he completed another journey following the infamous  “Middle Passage” of 17th and 18th century slave ships backwards from Puerto Rico to Brazil and finally to Ghana and Senegal in West Africa.  In 2000 Pinkney was asked to be the first captain of the replica of the Schooner La Amistad which was made famous in 1839 because of the slaves on board who were eventually freed by a U.S. Supreme Court decision.

Pinkney has received numerous awards, honorary degrees and recognitions including the 1992 Yachtsman of the Year Award from the Chicago Yacht Club.  He continues to work as a motivational speaker for public schools and corporations.  Although married twice before, William “Bill” Pinkney lives with his current wife, Migdalia Vachier, in Chicago.