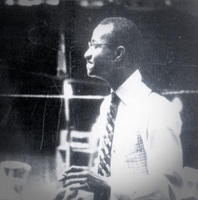 Maceo Pinkard was born on June 27, 1897 in Bluefield, West Virginia. He was an American lyricist and music composer that emerged from the Harlem Renaissance. Some of his best known works include “Sweet Georgia Brown,” now the Harlem Globetrotters theme song, and the Broadway musical, Liza. After his death he was inducted into the Songwriters Hall of Fame in 1984.

There is not much known about Pinkard’s upbringing besides that he graduated from the Bluefield Colored Institute in 1913 at the age of 16. After graduation, he toured with his band, only to end up in Omaha, Nebraska a year later. In 1914, he published his first song, “I’m Going Back Home,” and founded a theatrical agency. He also founded Pinkard Publications, now a music publishing firm in New York City, New York, and in 1917, he formed his own publishing firm, Maceo Pinkard Music. He was the first African American to own his own music publishing firm. In 1918, he was hired by a New York company (Shapiro, Bernstein Company), with whom he published his first major hit, “Mammy O’Mine.”

In 1919, Pinkard moved to New York City, where he remained until his death in 1962. During his time in New York, Pinkard wrote many songs that were recorded by famous artists such as Louis Armstrong, Billie Holiday, and Ella Fitzgerald.

In 1922, Pinkard wrote and produced the Broadway musical, Liza. Liza was a pioneering Broadway show with an all-black cast that helped to introduce the popularize the infamous dance, The Charleston. It also was the first black show to play on Broadway proper during the regular season; previously they were only run during the summer. Liza was a comedy and was shown at Daly’s 63rd Street Theatre in New York City and later moved to the Nora Bayes Theater on 44th Street. It opened on November 22, 1922, and ran for 172 performances, closing on April 21, 1963, during a time period when a running period of 100 shows was considered good.

On July 21, 1962, Maceo Pinkard passed away in his home of New York City. He is as one of the great jazz artists of the Harlem Renaissance.