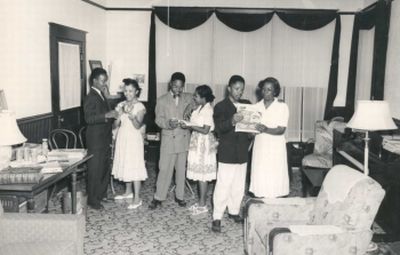 Laurence Clifton Jones was born on November 21, 1884, in St. Joseph, Missouri. In 1907, he graduated from the University of Iowa with a B.A. in philosophy. Committed to the popular educational model of the practical or industrial education, he spent two years on staff at the Utica Institute in Utica, Mississippi. Following a Christmastime visit to the state’s Piney Woods area and observing living conditions there, he realized the residents needed help to improve their means of basic survival. He felt the children could benefit from a school focusing on practical and industrial education.

This area of the state, mainly Rankin and Simpson counties, had dense hilly pine forests and soil that was poor. Log cabin dwellings, many built by slaves before the Civil War and set far away from main traveled roads, were common sights. Settlers lived an independent lifestyle, lacking a community. Many rural residents, former slaves turned farmers, were trapped in a subsistence-level economy, and few owned their own land.

Jones enthusiastically traveled through these counties talking to groups of people about his plan for “the high school that they were to help build.” To survive, the school would need the support of both the black and white residents. Business owners were interested in a school that would produce better workers. Rural blacks wanted opportunities of education that were currently denied to them. Without a formal school building, Jones nevertheless declared the school would be open on an upcoming Monday morning at “the cedar tree on the old Mordecai Harris place.” The gathering of students grew, as did the donations. People gave what they could, from a few dollars or a few pennies to gifts of lumber, labor or other resources. In 1910, property was deeded to the trustees of the Piney Woods Industrial School, and three years later a charter was granted to Piney Woods Country Life School.

Now, the sixty-acre campus sits among 2,000 wooded acres of rolling hills, forest, open fields and lakes, approximately 25 miles southeast of the capital city of Jackson. The self-sufficient campus includes a post office, farm, athletic fields, chapel and amphitheater. In an average year, students come to the school from more than twenty-eight states and internationally from Mexico, the Caribbean and several African nations. The school is funded by both donations and a significant endowment.

The Piney Woods School is accredited by the Southern Association of Colleges and Schools and approved by the State of Mississippi. It employs twenty-six certified full-time teachers from diverse backgrounds. Some of those teachers live on campus and offer individual guidance and support to the students. For the past several years at least 98 percent of graduating seniors enrolled in colleges and universities.