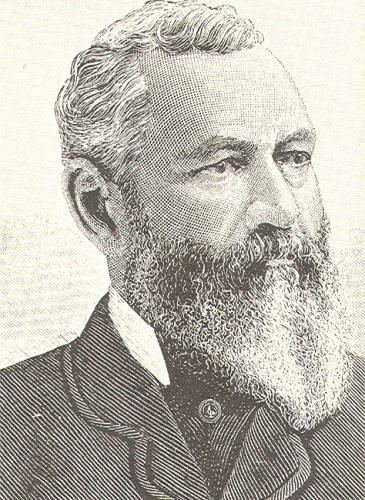 Pinckney Benton Stewart Pinchback was born on May 10, 1837 to parents William Pinchback, a successful Virginia planter, and Eliza Stewart, his former slave. The younger Pinchback was born in Macon, Georgia during the family’s move from Virginia to their new home in Holmes County, Mississippi.  In Mississippi, young Pinchback grew up in comfortable surroundings on a large plantation.  At the age of nine, he and his older brother, Napoleon, were sent by his parents to Ohio to receive a formal education at Cincinnati’s Gilmore School. Pinchback’s education was cut short, however, when he returned to Mississippi in 1848 because his father had become seriously ill.  When his father died shortly after his return, his mother fled to Cincinnati with her children for fear of being re-enslaved in Mississippi.  Shortly thereafter, Napoleon became mentally ill, leaving 12 year old Pinckney as sole-provider for his mother and four siblings.

Pinchback found work as a cabin boy on a canal boat and worked his way up to become a steward on the riverboats which ran the Ohio, Mississippi, and Red Rivers.  He was taken under the wing of professional gamblers who worked the riverboats, and soon became a skilled swindler himself.  During these years, he sent as much money as possible to Cincinnati to help support his mother and his siblings.

In 1860 when he was 23, Pinchback married Nina Hawthorne, a 16 year-old from Memphis, Tennessee with whom he would have four children.  When the Civil War began the following year, Pinchback ran the Confederate blockade on the Mississippi River to reach Union-occupied New Orleans, Louisiana where he raised a company of black volunteers to fight for the North.  In 1863, after being passed over for promotion a number of times, Pinchback resigned from service.  At the close of the war, he moved his family to Alabama to test out their new freedom.  After encountering dreadful levels of prejudice in Alabama, Pinchback moved his family to New Orleans.

Upon settling in New Orleans, Pinchback organized the Fourth Ward Republican Club, and was a member of the delegation that established a new constitution for the state of Louisiana in 1868.  Later that year, he was elected to the Louisiana State Senate, and subsequently became the institution’s president pro tempore.  In 1871, the Lieutenant Governor of Louisiana, Oscar Dunn, died of pneumonia and Pinchback was chosen by the state senate to succeed Dunn.  He served as lieutenant governor until the winter of 1872 when impeachment proceedings were initiated against Governor Henry Clay Warmouth.  From December 9, 1872, to January 13, 1873 Pinchback served as acting governor of Louisiana, making him the first person of African descent to serve as governor of any state.

Before ascending to the office of governor, Pinchback had run for both a U.S Senate seat and a seat in the U.S. Congress simultaneously in 1872.  He won both contests but was barred from taking his congressional post when his opponent contested the election and was awarded the position.  Pinchback was denied his seat in the senate as well as a result of charges of election fraud.

In 1887, at age 50, Pinchback decided to embark on a new career and entered law school at New Orleans’ Straight College, where he graduated in 1889.  He moved his family to New York City, New York in the 1890s where he served as U.S. Marshall from 1892 to 1895, before relocating again to Washington, D.C.  Pinchback remained in Washington and was active in politics until his death on December 21, 1921.