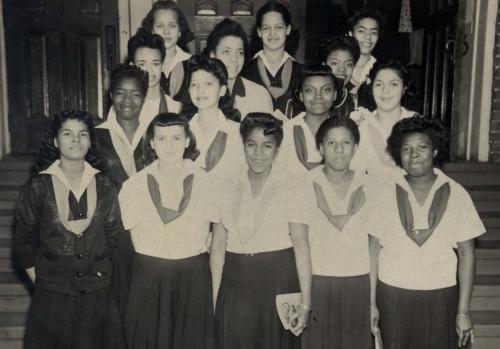 The Phyllis Wheatley Women’s Clubs were named after Phyllis Wheatley, an enslaved poet who lived from 1753 to 1784. The first Phyllis Wheatley Women’s Club was established in 1895 in Nashville, Tennessee. The founders sought to improve the status of African American women in American society by promoting a proper Victorian image for the African American societal elite and by work on behalf of the poor to improve their condition. Services provided by the clubs included lodging for women, homes for the elderly and infirmed, educational and recreational programs for youth, and a forum for discussing political issues.

After the first club was established in Nashville, Tennessee, others followed in Chicago, Illinois in 1896 and Detroit, Michigan in 1897. These northern clubs helped young women who moved from the South to the North, looking for work. It was difficult for African American women to find decent housing and work and the clubs provided services to establish these women in Northern urban society. Some clubs focused on specific objectives.  The Buffalo, New York club asked the Buffalo police force to quell vice in the black neighborhoods. It also sought to improve the public library by providing books by African American authors.  Like other clubs, however, the Buffalo club raised money to provide a monthly pension for Underground Railroad leader Harriet Tubman.

After 1900, the clubs consisted of two models: those that were independent, and those that were considered colored branches of the Young Women’s Christian Association (YWCA). Those that were affiliated with the YWCA received significant financial support but were usually supervised by a white board that technically had control over the club. In 1931, the National Association of Colored Women (NACW) formed its own Phyllis Wheatley Home Department, which provided the same services as YWCA-affiliated clubs in cities that did not have them. These clubs were not under white control. In 1946, the YWCA began the process of desegregation, but maintained the Phyllis Wheatley name on many branches. Some still carry the name today.