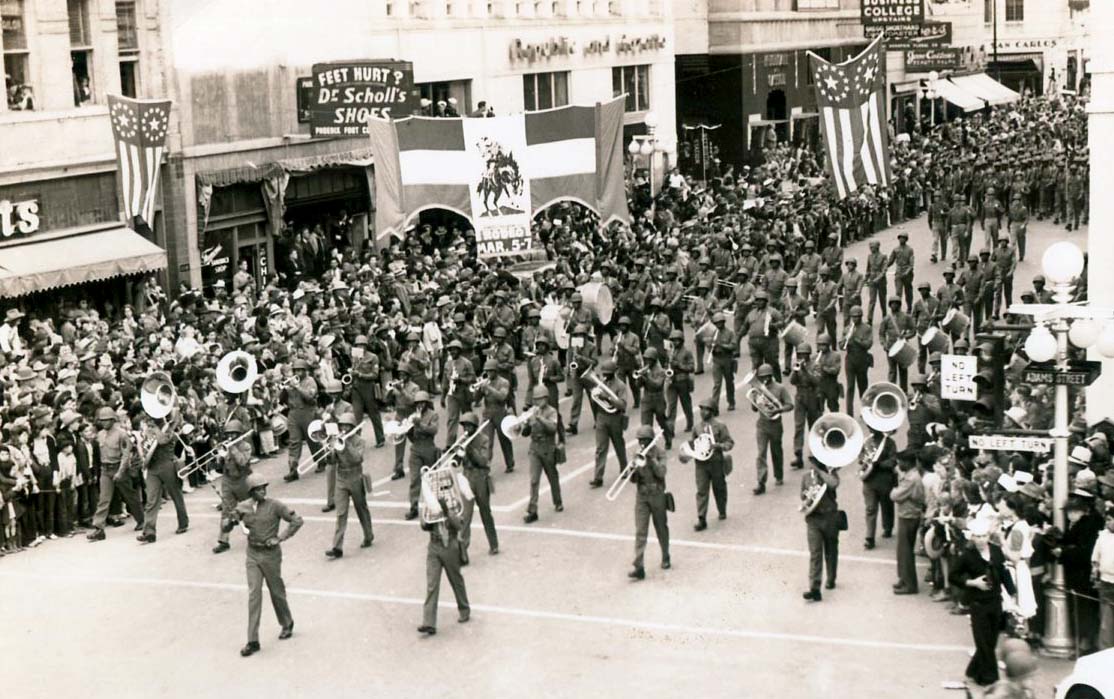 The events of the Phoenix Thanksgiving Day Riot began on Thanksgiving, November 27, 1942. An off-duty soldier from the all-black 364th Negro Infantry Regiment became drunk at the Alhambra Bar, located at the corner of 12th & Washington Streets in Phoenix. A black female patron got into an argument with the soldier and slapped him. The soldier responded by hitting the woman with a bottle. Officers from the all black 733rd Military Police unit, stationed at the nearby Fairgrounds, were called to the scene, and tried to arrest the soldier, but he resisted and brandished a knife.

A crowd formed outside of the bar, including civilians and soldiers from the 364th. Arriving officers of the 733rd each fired a shot into the air to try and disperse the crowd. One officer from the 733rd shot a second shot into the ground, but the bullet ricocheted and struck and wounded a soldier of the 364th. Some soldiers returned to camp and told an exaggerated account of the incident, and many of the soldiers armed themselves, piled into a Jeep and headed into town for revenge. By one account soldiers dispersed from the Jeep firing handguns, rifles, and high-caliber automatic weapons.

Soldiers from the 733rd military police unit were ordered to the Camp Papago arsenal and issued weapons and ammunition. The clash between the soldiers of the 364th and the 733rd, now reinforced by Phoenix police, resulted in a riot. Phoenix police officer Leon Thompson was walking his beat, heading down 16th street, and was pinned down by the surrounding gunfire. He laid in the street for four hours, playing dead to avoid being shot.

Other military police personnel from the 733rd arrived in armored vehicles and began hunting for those involved. Many soldiers of the 364th hid inside the homes of friends. The armored vehicles pulled up in front of one home and used a loudspeaker to call on anyone inside to surrender. When soldiers didn’t respond, the 733rd military police used 50-caliber machine guns to blast holes the size of a fist through the house.

By the end of the night, three soldiers of the 364th were killed and eleven others wounded. Phoenix police officer George Haines had a toe shot off. Over two hundred men of the 364th were arrested and held in jail for a week before being released back to their unit. Fifteen soldiers were court-martialed for “disobeying orders, mutiny and inciting a riot,” and received federal prison sentences for up to fifty years. Private Joseph Sipp of the 364th was sentenced to death, but President Franklin Roosevelt intervened and had his sentence commuted.