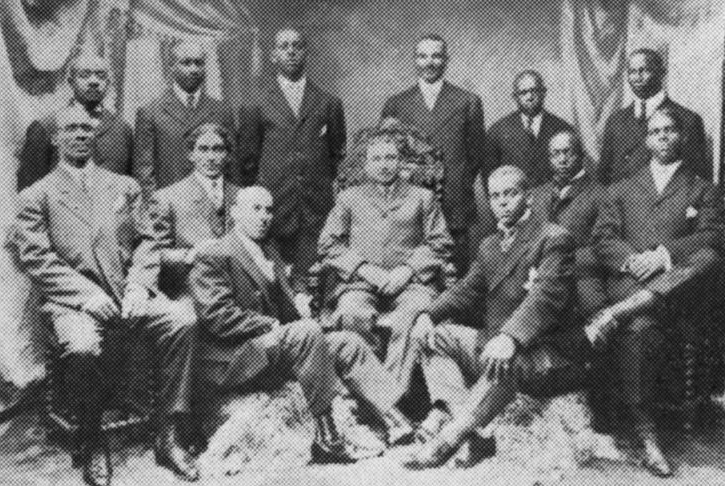 The Philadelphia Giants were a Negro baseball team that played from 1902 to 1911. From 1904 to 1909 they were one of the strongest pre-Negro League teams in black baseball, winning five eastern championships in six years 1904-07. In 1902, Harry A. Smith, a former baseball player and writer for the Philadelphia Tribune, a black newspaper, visualized the concept of organizing a baseball team and approach H. Walter “Slick” Schlichter a white American sports executive, sportswriter, who wrote for the Philadelphia Evening Item, a daily newspaper, for financial support. Sol White, an influential figure in Negro baseball, was hired as captain of the newly established Giants and was immediately given the responsibility of player recruitment. Smith, Schlichter, and White built the Philadelphia Giants into one of the strongest baseball teams in the country.

Sol White played shortstop and manage the team. For their first season, he recruited several star players for the team including Clarence Williams, Frank Grant, and John Nelson. In 1903, White brought Harry Buckner, William Binga, Robert Footes, Bill Monroe, and John W. Patterson onto the team. Schlichter arranged for the Philadelphia Giants team to play in the major league Columbia Park while the white baseball team, the Philadelphia Athletics, were on the road. Throughout the season the Giants issued challenges to the Cuban X-Giants to compete in a Negro league championship series, but the Cuban X-Giants declined. The first season of the Philadelphia Giants ended with a two-game series against the American League champion Philadelphia Athletics, who won both games.

In 1905 the Philadelphia Giants won their second Colored Championship, beating the Brooklyn Royal Giants. In 1906 the Giants joined a multiracial baseball league, the International League of Independent Professional Base Ball Clubs. The Giants made an offer to play either the National League pennant winner the Chicago Cubs or the World Series winner the White Sox, but neither team responded. That same year they once again faced and defeated the Cuban X-Giants, winning both the National Association championship and another World’s Colored Championship. Subsequently they played two games with the Philadelphia Athletics, losing both.

In 1907, they joined the first organized black professional league of the twentieth century, the National Association of Colored Baseball Clubs of the United States and Cuba. Rube Foster, Pete Hill, and three other players left the Giants to join the Leland Giants in Chicago. Nevertheless, the Philadelphia Giants continued to be known as an excellent team and won their fourth consecutive eastern championship and toured Cuba. In 1908 the first Black Championship Series between the east and west was played, as the Leland Giants played the Philadelphia Giants in a World Series. The series ended with a tie. In 1909 the Giants won another Eastern Championship. After winning the championship, White and Schlichter had a disagreement and White left the club to form his own team. Following White’s departure, several team’s top players followed, and the team quickly declined, finally ending in 1911.