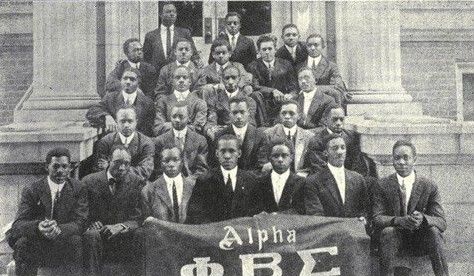 Phi Beta Sigma Fraternity, Inc. (Sigma) was founded on the campus of Howard University in Washington, D.C., on January 14, 1914, by three college students,  A. Langston Taylor, Lenard F. Morse, and Charles I. Brown on the principles of Brotherhood, Scholarship, and Service. The founders wanted the organization to be “a part of” rather than “apart from” the community. They also wanted to create an inclusive organization that did not discriminate by racial background, family background, or social status.

By the summer of 1914 Phi Beta Sigma had grown from the three founders to over 14 members in its Alpha Chapter at Howard University. The fraternity, seeking to broaden its appeal beyond undergraduates, also initiated a number of rising scholars in the black community including Dr. Edward P. Davis, Dr. Thomas W. Turner, and Dr. Alain Leroy Locke, a 1907 graduate of Harvard University who in 1908 entered Oxford University in England as the first African American Rhodes Scholar.

The fraternity grew quickly across the nation with chapters from Maryland to Texas by 1920. Also by that date, Phi Beta Sigma members Charles R. Taylor and A. Langston Taylor helped to establish the first “sister” sorority to a black fraternity, Zeta Phi Beta Sorority at the Howard University Campus. Sigma and Zeta are the only constitutionally bound sister-brother organization among black Greek-letter groups.

From its founding the fraternity believed it should be a vehicle for delivering services to the African American community. The founders showcased that idea with the fraternity’s motto, “Culture for Service and Service to Humanity.” One of its earliest programs, the Bigger and Better Negro Business initiative, began at the Sigma national convention in Philadelphia in 1924. The fraternity allowed over fifty black businesses to exhibit at the convention to help them establish a national market for their products. Today the initiative is promoted through Project S.E.E.D. (Sigma Economic Empowerment Development) which continues to champion African American business but which also provides financial literacy classes and promotes home ownership.

The Sigma Education Program provides services and assistance to graduates and undergraduate students, raises funds for scholarships and sponsors lectures, college fairs, and mentorship programs across the nation. The Sigma Wellness Program focuses on healthy lifestyles through education. Project Vote continues to register voters while Phi Beta Sigma Capitol Hill Summit allows fraternity members to discuss critical issues with U.S. Congressmen. In 2001, the fraternity opened the Sigma History Museum, a traveling exhibit which focuses on the history of Sigma and its impact on the nation.