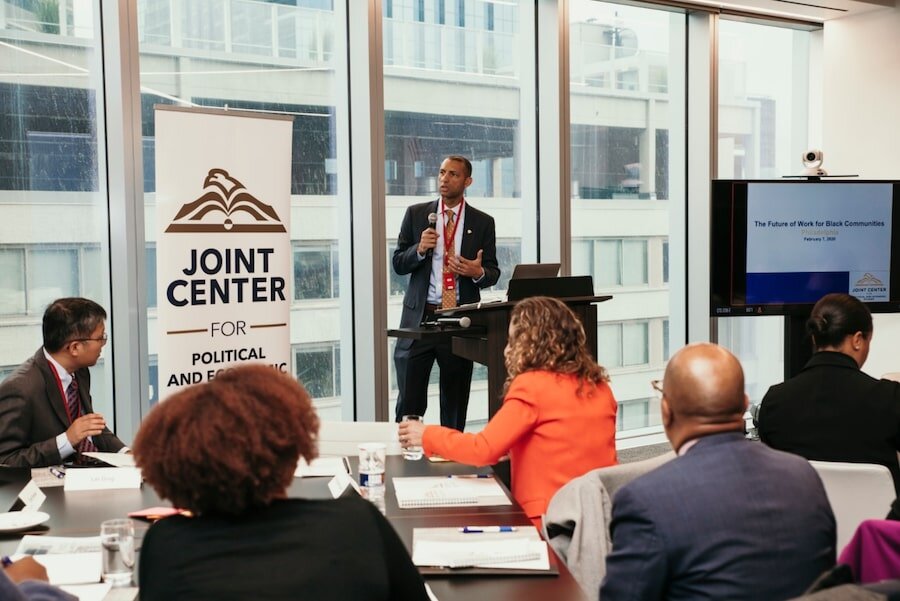 In the article below, attorney and Joint Center for Political and Economic Studies Contributor Robert Gray describes the founding and early history of the oldest Black think tank in the United States.

The Joint Center for Political and Economic Studies (formerly the Joint Center for Political Studies) is America’s oldest public policy institute specifically designed to advocate for African Americans. In April of 1970, it was founded in Washington D.C. with an $820,000 grant from the Ford Foundation. Psychologist Dr. Kenneth B. Clark and prominent newspaper editor Louis E. Martin were among the Joint Center’s founders. Dr. Clark is perhaps best known as the author of the Clark study cited in Brown v. Board of Education, the landmark U.S. Supreme Court decision that in 1954 declared segregated schools unconstitutional. Martin had served as a key advisor to U.S. Presidents John F. Kennedy, Lyndon Baines Johnson, and Jimmy Carter. The Joint Center’s (or “the Center”) original mission was to provide training, support, and assistance to newly-elected Black politicians, many of whom took office immediately after the Civil Rights Movement of the 1960s and passage of the Voting Rights Act of 1965. The Center’s singular, long-term goal was to use all legitimate means to maximize the political power of Black people.

African American politicians had remarkable and unexpected political success in the aftermath of the Civil Rights Movement. The number of Black elected officials in the U.S. jumped from 72 in 1965 to 1,469 by 1970. White politicians were able to rely on the “good ol’ boy” network and the clubhouse wisdom of their seasoned, experienced colleagues for advice on how to navigate America’s political climate. Black officials, however, were left to their own devices and subject to the whims of their anxious constituents.

The Joint Center stepped in to offer Black politicians, at every level of government (from local schoolboards to the U.S. Congress), assistance in managing their political affairs. The Center helped these officials avoid becoming overwhelmed by dramatic headlines and visceral public reactions to the polarizing and controversial issues of the day, such as police brutality and the war in Vietnam. It kept the attention of the Black politicians focused on policies that would create lasting, meaningful change.

But not everyone within the African American community liked the idea of Black progress within the established political structure. Militant Black activists were suspicious of the Joint Center and its mission. They believed that equality could be achieved only through Black liberation and separatism and were unwilling to wait patiently for the political process to bring about change. As journalist Juan Williams wrote in 1965, “to them, the [Joint Center] would merely become a midwife for white efforts to increase the number of moderate accommodationist [B]lack politicians.” Nevertheless, in the eyes of the Joint Center and the words of its first executive director, Howard University School of Law professor Frank Reeves, “the reason to focus on Black politics was to ‘improve the conditions of the ghettoes against which we rebel.’”

Frank Reeves was a tenacious and enthusiastic political activist, who made serious engagement with politics and social issues a core value of the Joint Center. The Joint Center’s board chose Reeves because he was committed to Black solidarity but wanted to move Black priorities using “grassroots” politics. He connected Black political leaders across the country. During his tenure, he published the National Roster of Black Elected Officials through the Joint Center which became a valuable coalition-building resource.

However, in June of 1972, Reeves was forced to resign amid criticism that his myopic focus on politics caused him to neglect the organization’s other needs, most importantly, fundraising. Thus, in the mid-to-late 1970s, after Reeves’s departure, the Joint Center underwent drastic ideological and structural change.

Journalist Eddie Williams succeeded Reeves as its next chief executive. At the time, Williams was vice president of public affairs at the University of Chicago and the director of the University’s Center for Policy Study.

Originally, the Joint Center had been “jointly” founded by the Metropolitan Applied Research Center (MARC) and Howard University. MARC was a non-profit research corporation, founded by Dr. Kenneth B. Clark, concerned with issues affecting urban Blacks in America. It provided program oversight, while Howard maintained administrative and financial control of the institution. By the early 1970s this arrangement began to limit the effectiveness of the Joint Center. In October 1976, Eddie Williams led negotiations with the Ford Foundation that allowed the Center to cut its formal ties with Howard and MARC and it officially became an independent, nonpartisan, nonprofit organization.

Under Williams, the Joint Center grew but faced new challenges and opportunities in the later 1970s, so he began to look beyond legislation for solutions to Black problems. Younger and more educated Black political leaders started to emerge all over the country. Organizations like the National Conference of Black Mayors and National Caucus of Black State Legislators (which the Joint Center helped create), began to reduce the Center’s influence. The new Black politicians of the late 1970s and 1980s were not only concerned with the ongoing struggle for equality but also with underlying economic issues such as job and housing discrimination. Moreover, the new Black leaders sought to address other more subtle social influences like the inferior education that plagued poor Black communities often leading to family disintegration, drug abuse, gangs, and crime.

In December 1980, Williams held a conference of influential Black voices aimed at setting a new course for the Joint Center. Among those in attendance were Wiley Branton, dean of Howard University School of Law, Marian Wright Edelman, president of the Children’s Defense Fund, and Eleanor Holmes Norton, chair of the Equal Employment Opportunity Commission. At that meeting, Williams and his colleagues decided that the Center’s new trajectory must increase its involvement with race-related policy issues and provide Black people with more opportunities for economic advancement.

Williams asked Kenneth Clark, who was still a member of the Joint Center’s board, and historian, Dr. John Hope Franklin, to write an essay on the status of Black America. A Policy Framework for Racial Justice served as an honest assessment and account of the progress Blacks had made, the challenges that remained, and it was a springboard into the future of the Joint Center. It suggested that the traditional method of Black social organization driven by support for “charismatic” leadership should be set aside. The report advocated for a new model for change that would provide reliable research and data analyses that policymakers, regardless of party affiliation, could use to help address the needs of Black people.

The protection of voting rights would become (and continues to be) an area of particular interest and expertise for the Joint Center. However, Williams’s commitment to economic empowerment did not wane. In 1986 he added the word “Economic” to Joint Center’s name and recruited Dr. Margaret Simms, an economist specializing in the condition of the Black community. Williams hired Dr. Simms to direct the Joint Center’s burgeoning interest in economic research.

To this day, the Joint Center continues to exert considerable influence on Capitol Hill in the areas of social and economic policy. Both Democrats and Republicans use its research and data analyses on issues affecting Black people to shape legislation at the national and state levels. For example, the 2021 Congress added elements of a Joint Center report on the expansion of broadband internet access in the Black rural South to its bipartisan $1 trillion dollar infrastructure bill. Additionally, in June 2021, the Center published its Report on Black Assistant and Under Secretary Nominations which held the Biden Presidential Administration accountable for Black representation in key positions. The attention garnered by that report has directly contributed to a significant increase in the number of Black nominees for political appointments.

Still known as “America’s Black Think Tank,” the Joint Center is now chaired by Spencer Overton, a tenured law professor at George Washington University. He was appointed as President and CEO in February of 2014 after Ralph B. Everett stepped down in late 2013.

Under his leadership, the Center continues to address a wide range of major economic and political issues affecting Black America including: the disproportionate effect of economic recession and recovery, tech policy and the Digital Divide, Black civic participation and representation in government, and the fallout from the 2020 coronavirus pandemic. Moreover, Overton keeps the Center committed to increasing Black voter participation, by highlighting political voter dilution efforts, and promoting legislation that thwarts disenfranchisement.