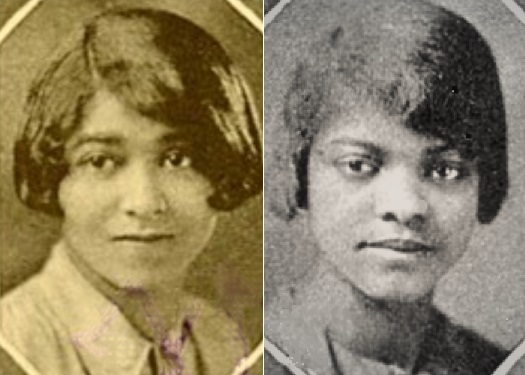 In the article below, independent historian Robert Fikes describes a little-known civil rights campaign in the late 1920s to desegregate the nursing staff in San Diego area hospitals.

The campaign for racial justice in San Diego and the United States is often portrayed as a series of major victories such as the desegregation of schools, the end of housing discrimination, gaining the right to employment at major firms that had excluded African Americans. What if the narrative focus changed to concentrate on small but nonetheless significant victories that slowly brought the community closer to equality. One such victory, now virtually ignored, came in 1929 when an African American woman, Frances Louise Hamilton, became the first Black person to graduate from the San Diego County Hospital Nurses Training Program.

Hamilton and Williams were stellar students at San Diego High where, in addition to their varied extracurricular activities, they were known to have been interested in health and medicine. Hamilton was outgoing and could boast of having many friends. Williams circulated in the upper social strata of Black women in the city. Neither wanted to leave home for Los Angeles, Chicago or the South to study nursing. They had thrived in an overwhelmingly white high school and believed they could successfully compete with the seventy or so white students enrolled in County Hospital’s nursing courses. But they may not have anticipated the extent of rage local whites would vent on them for their ambition.

San Diego in the late 1920s was a town of 146,000 residents with its 2,600 Blacks comprising less than 2% of the population. There was a tiny group of professionals in San Diego’s Black community including medical doctors Fred C. Calvert and Fred T. Moore, and dentist Jesse D. Moses, but there had never been a formally trained, credentialed nurse. The fact that 120 miles north the Los Angeles County Hospital had been accepting Black students since 1919 reflected poorly on the San Diego County Board of Supervisors whose members dithered for a year avoiding acting on a 1926 plea from the local branch of the National Association for the Advancement of Colored People (NAACP) to allow admittance of Black women in the County Hospital’s nurse training school.

NAACP branch president Dennis Volyer Allen, a mail carrier, refused to be ignored, returning to the board on multiple occasions to press his organization’s demand, telling Supervisors that young Black women were as intelligent, refined, and hygienic as their white counterparts and that the only real barrier was artificial, “only a color restriction.” He reminded them that Blacks were property owners and taxpayers and to deny them access to education was tantamount to taxation without representation. Allen swore that should the board vote to deny admission of Blacks, he would “revive the issue again and again” until it voted approval.

Allen and the NAACP had allies in the campaign to desegregate nurses training at the San Diego County Hospital. Black community organizer Martha T. Dodge, the wife of a banker and a personal friend of W. E. B. Du Bois, declared that she had received requests from both Blacks and whites who wished to employ Black nurses. “Why shouldn’t they?” she asked. “They are just as competent. If one cares to recall earlier days [in San Diego] it will be remembered that when there were few hospitals and nurses’ schools, colored women were very much in demand and were the best nurses we had.”

A. L. Brown, editor of the city’s Black newspaper, the San Diego Ledger, echoed her thoughts and those of other progressive leaders when he said: “Our girls should be allowed to learn nursing if they want to. They have every legal and moral right to take advantage of the training school of the County Hospital.”

Local Blacks had white progressive allies in the desegregation campaign. Retired San Diego Superior Court judge and former NAACP branch president Alfred Haines added legal gravitas to the desegregation proponents when he asserted: “There is no authority of law authorizing the maintaining of white and colored nurses. On the same principle, there is no authority in the Board of Supervisors either to establish a separate school for the training of nurses for colored young women or to exclude them from the training school as established.”

From faraway Oregon British-born Dr. Joseph Tregelles Fox, who once practiced as a medical missionary in Africa, sent a lengthy letter-to-the-editor of the San Diego Independent attacking the “illogic” of the opponents of desegregation. More consequential, Nellie Foster, a sociologist and social worker who taught part-time at San Diego State Teachers College (now San Diego State University), presented a petition in support of desegregation to the region’s chapter of the Women’s International League for Peace and Freedom (WILPF) which convened at the palatial home (now a museum) of its founder, tireless social activist Helen Marston, daughter of the wealthy business magnate and philanthropist George W. Marston. More than fifty influential white women gathered there signed the petition calling for opening the nursing program to Blacks. They saw the production of Black nurses as essential to improving Black wellness “in their own hospitals and broaden the field of trained workers in their own circle.”

Despite these efforts of local African American leaders and their progressive allies and supporters, the attempt to desegregate the county nurse training program met strident opposition. The hospital’s superintendent and medical director, Dr. George Roy Stevenson, a fellow of the American College of Surgeons, opposed admission arguing it was not simply a matter of race. “My hesitancy is due to a sincere doubt as to the benefit that colored girls will obtain with this training,” he told a reporter for the Independent. He cited the relatively small number of Black nurses trained in Los Angeles and the difficulty they had in finding employment outside the hospital, predicting there would be even less need for them San Diego.

A broad headline in the San Diego Evening Tribune, September 6, 1927, screamed “WHITE STUDENT NURSE RESENTS NEGRESSES.” Angrier than the white cadet nurses in Los Angeles in 1919, according to the article, the white trainees at San Diego County Hospital threatened to stage a walk-out and dredged up every warmed-over, degrading stereotype to justify their stance as the decision of the Board of Supervisors approached. Their protest declaration was distributed to the press. In it they ridiculed the privileged women of the WILPF and asked: “Would these same society ladies be willing to share their homes (and their living rooms, dining rooms, and toilet facilities, etc.) with a negro? Would they wish their daughters to rub shoulders with them as equals which is what we will be called upon to do…We think not.”

The white cadet nurses double-downed on racism, claiming that the “high type of white girl” would undoubtedly choose to attend a school that barred Blacks. Then they mistakenly insisted that no other nursing school in California had admitted Blacks, and finally they argued that persons of African descent had not evolved intellectually or socially enough to mix with whites and would remain centuries behind descendants of Europeans.

They concluded their screed by declaring that if forced to train with Blacks, at minimum there must be a separate dormitory, dinning room, and entertainment lest they sink to the level of less civilized “negro girls.” They conceded Blacks had a right to better themselves through education but “wished they would go anyplace but here, please.” (Emphasis added.)

Allen and officers of the NAACP were appalled at the tone and tenor of white students’ protest. They drafted a written response that appeared in the August 31 issue of the Independent. Among other things, they reminded readers that the nursing program instructed students from foreign countries so why shouldn’t local taxpaying Black families, “steeped in American customs [and] think(ing) from the American viewpoint” and speaking English, be compelled to send their daughters far from home to be educated?

“White students loathed to socialize with Blacks,” they argued, “should understand that the hospital is an institution of learning as well as business and is not a social hall for parties.” The letter concluded, “The young [white] ladies had best concentrate on their coursework and expect social intercourse to “take care of itself.” A large portion of the NAACP response summarized the achievements of 21 African-descended men and women from Juan Latino to Alexander Pushkin to Bessie Coleman, all meant to refute the slur of racial inferiority. They concluded by thanking the WILPF for their faithful assistance in advancing a just cause.

When the county supervisors finally decided on August 28 that Hamilton and Williams were qualified to enter the nurse training program, the local branch of the NAACP, founded just eight years earlier) celebrated and leading Black newspapers, including the Pittsburgh Courier, headlined the civil rights triumph in Southern California. Dennis Allen hurried to the Western Union office to wire a message to NAACP national headquarters in New York City. His message read in part, “The San Diego branch of the National Association for the Advancement of Colored People was victorious in the fight for admittance of colored girls as nurses in the San Diego County Hospital.”

But victory was incomplete. Another organized push was required. What Allen failed to mention in his telegram, was the huge problem of lodging for Hamilton and Williams. Momentum to improve that situation came to a head in late October.

Dr. Stevenson had previously maintained that he also opposed desegregation because there were no vacancies in the nurses’ dormitory. Of course, the white trainees viewed things through a different lens and threatened to evacuate the facility should the Black girls move in. Nursing Supervisor Maude McClaskie had sidestepped the landmine of having the Black trainees in the dining hall when she made them sit only at her table, putting distance between them and white trainees.

A delegation led by Allen returned to the Board of Supervisors to pressure it to find safe space in the dormitory. Somewhat exasperated and wanting to foreclose further involvement, the board referred the matter to a hospital committee to work up a plan. Reluctantly, Allen and the NAACP yielded to a scheme proposed by hospital representatives: continue having Hamilton and Williams sleep in their own homes and have the County Hospital pay their daily round-trip transportation fare. Considering all the risky alternatives and ugly racial climate, it seemed to both sides the only rational, practical option. With the lodging problem resolved the drama of demands and protests ceased. The press lost interest and the Black probationary newcomers and their white classmates settled into the routine of work and study.

On May 14, 1929 the 22 graduates of the 29th class of the San Diego County Hospital’s School of Nursing received their diplomas at First Methodist Church. One of the graduates was Frances Hamilton. She had fulfilled her dream and in so doing lived up to the expectation of her champions in the NAACP, the WILPF, and others who fought on her behalf. Soon afterwards she moved to Los Angeles. Hallie Williams dropped out of the nursing program. She also moved to Los Angeles and both women then disappeared from the historical record.