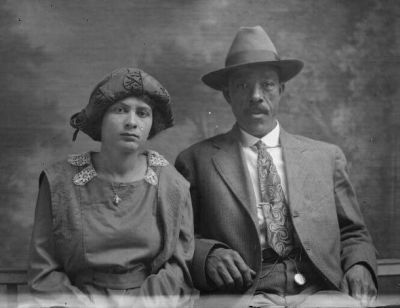 The area of South Texas known as the Lower Rio Grande Valley became in the period between the U.S. Civil War and World War I one of the few regions south of the Mason-Dixon Line where racial miscegenation laws were frequently challenged.  As a consequence a small but significant number of prominent black-ethnic Mexican families emerged to complicate both the Anglo-Mexican and black- white racial dichotomies so common in the rest of the nation. In the article below historian Alberto Rodriquez describes that process.

The U.S. Census of 1900 for Cameron County, Texas, which today is dominated by the cities of Harlingen and Brownsville, showed an unusual statistic.  According to that census, 177 blacks formed 18 households in Cameron County.  Of those eighteen households, seven or 38% were interracially married.   In neighboring Hidalgo County, where the largest cities are Donna, McAllen, and Edinburg, Texas, there were 18 out of 25 families interracially married or 72% of the black population.  These two counties had the highest rates of interracial marriages involving at least one black spouse in the United States at that time.

Most of the black women and men of Cameron and Hidalgo Counties migrated from the Deep South to the southern most region of Texas.  These were farm families.  Out of the 18 interracial households in Cameron County, nine families (50%) owned their land while nine families rented.  In Hidalgo County, 10 out of 25 or 40% of the interracially married couples owned land.  If blacks acquired land in South Texas, it happened in one of two ways.  Either they had economic success which provided the resources to purchase land, or they married into the landed ethnic Mexican families of South Texas.

These interracial marriages along the Lower Rio Grande Valley for the most part were black men marrying ethnic Mexican women or first generation Tejanas (Texas-born women of Mexican descent).  Typical of these marriages was the union of Louis and Angle Rutledge of Hidalgo County.  Louis Rutledge was a black male born in Alabama who lived in the county’s Second Precinct in 1900.  In 1886, he married Angle, an ethnic Mexican woman who was born to Mexican parents.  The Rutledges, who had been married 14 years by the time of the 1900 census, had seven children ranging from two to thirteen years of age.  The census also shows that all the children attended school.

It was more common for blacks and ethnic Mexicans to cross racial lines and marry at this time and in this area of Texas than any other section of the state.  Since ethnic Mexicans were considered white by Texas officials and the U.S. government, such marriages were a violation of the state’s anti-miscegenation laws.  Yet, there is no evidence that anyone in South Texas was prosecuted for violating this law.

Moreover, there seemed to be little stigma attached to these marriages from the families involved.  In 1900, Juan Zuniga’s daughter, Redacinde Jackson, lost her black husband. She then returned with her children to her father’s home.  Interracial families were often what would today be called blended families since both husband and wife brought children from previous marriages into the new households.   Juan Singletary of Hidalgo County had two stepsons, Ballagar and Davie Solis, living with him.  Both were sons of Antonia, his ethnic Mexican wife.  Nagario Jackson also had a stepson living in his household.  His name was Christ Visnuevo, the stepson of his ethnic Mexican wife, Eugiruia.  As the given names Juan and Nagario suggest, these “black” men themselves had ethnic Mexican mothers and thus represented a second generation of racially blended families.

The roots of this unusual interracial marriage dynamic can be traced into the 19th Century.  Many black men who moved into the Lower Rio Grande Valley after the Civil War married into ethnic Mexican families soon after their arrival.  They joined black women and men who from the 1850s onward found sanctuary on the U.S./Mexican border. Although the black population in the Rio Grande Valley of South Texas can be traced back to the mid 1740s with the settlement of the Afro-Spaniard José de Escandon, most black migration to the Rio Grande Valley happened in three periods: 1.the Underground Railroad era with enslaved people fleeing from the slaveholding southern United States into Mexico between 1836 and 1865, 2.free black settlers on the border between 1850 and 1900, and 3. twentieth century black migrants who arrived between 1900 and 1960.

In 1849, for example, slave-owner Lad Kinchlow of Wharton County, Texas, freed and sent one-year-old Ben Kinchlow, his older brother, and his mother, Lizaer Moore, to Matamoros, Mexico.  Although Ben does not give any explanation for his family’s emancipation, he does state that he never knew his white father, Lad Kinchlow.  Ben worked both sides of the border as a ranch hand and cowboy in the 1860s and 1870s.  During that period he reported friendly interaction with ethnic Mexicans both in Texas and Mexico.  When Kinchlow was five years old, his mother Lizaer (Eliza) Moore, married Juan Rios, an ethnic Mexican from Brownsville, Texas.  Although Kinchlow did not claim any lineage to his ethnic Mexican stepfather or siblings, he found love within the South Texas ethnic Mexican society. Kinchlow said in a 1937 WPA interview that he “fell in love” with Antonita Flores:

Antonita was the one I fell in love with… Of co’se I had chances to talk to her some. I used to go by Antonita an’ smile an’ pass her a sign an’ she always answered.  I would have married her if I had stayed on there but I was young an’ hadn’t even joined up with [Texas Ranger Lee] McNally [of Brownsville, Texas] yet an’ when I left their [sic], I drifted farther away an’ never did go back. But Antonita stayed in my memory a long time.  She was good an’ kind an’ as pretty as a rose. I thought lots of her an’ I knowed she thought lots of me. We used to ride together but most of the time the old man was with us. Sometimes I got to talk to her an’ I could slip in a nice word while we were off together.

Kinchlow’s brief fling with Antonita reflected the complexity of race and ethnicity in South Texas at that time.  Although Antonita was legally white and thus their relationship was a violation of Texas miscegenation laws, according to Kinchlow, Antonita Flores’ father knew about them and allowed the courtship to continue under his supervision.  Antonita’s father thus obviously had a different understanding of the miscegenation laws that existed from the Civil War through the mid-20th Century.

Even Anglos found the Lower Rio Grande Valley a haven for mixed race relationships.  John Webber, an Anglo from Travis County, Texas, married one of his former slaves, Silvia Hector, soon after he founded Webberville.   Yet Webber and his interracial family, which by this time included three children, were forced to flee the town he founded because of opposition to their status as a mixed race family.  They moved further south in 1853 and settled near Donna, Texas in the Lower Rio Grande Valley.  The Webber family eventually acquired 27,000 acres of land along the Rio Grande.  Three other black families, the Jacksons, Singletarys, and Rutledges, arrived in South Texas with the help of the Webber family.  Their descendants married ethnic Mexican men and women.  Black-white marriages like that of John and Silvia Webber, however, remained rare.

The Webbers, Jacksons, Singletarys, and Rutledges, all of whom acquired large ranches, established a pattern of interracial marriage that was copied by other African American migrants into the region after the Civil War.  Thus the Census of 1900 confirmed a half century of interracial blending between blacks and ethnic Mexicans in the Lower Rio Grande Valley.  Today most of the Lower Rio Grande Valley people who carry the last names of Webber, Jackson, Singletary, and Rutledge are all Spanish-speaking people who claim Mexican descent.

By the early 1900s, new waves of black settlers in South Texas were becoming an integral part of the growing agro-business economy in the region.  Many of them worked on the St. Louis, Brownsville & Mexican Railway.  Ironically the demand for their labor and the growing residential segregation that finally swept into South Texas from the rest of the state, allowed their small communities to flourish.

Although the four major interracial families–the Webbers, Jacksons, Singletarys, and Rutledges– increasingly identified as ethnic Mexicans, they nonetheless continued to support the black newcomers who arrived in the area.  One of their most important contributions was Jackson Chapel, a Methodist Church found in 1874 on Jackson Ranch between the communities of Donna and Hidalgo, Texas.  The one room church served both as a school and community meeting center and still serves that purpose today.  The church became the center of the small but growing black community while the school, for many years, provided the only educational opportunity available to African American children.  As vital as it was to black South Texas, however, Jackson Chapel also provided a space for Anglos, blacks, and ethnic Mexicans to meet, exchange culture, and interact in their daily lives.

Jackson Chapel led the way for all-black churches in the Lower Rio Grande Valley.  By 1930 Brownsville, Raymondville, Harlingen, and Edinburg all had such churches.  As the African American population in the Lower Rio Grande Valley grew in the period between 1880 and 1920, these churches helped establish a sense of African American autonomy from both the Anglo and Mexican worlds and for the first time black communities became a distinct part of the increasingly diverse South Texas racial makeup.  Yet, the growth of racially exclusive neighborhoods for Anglos, blacks, and ethnic Mexicans limited and discouraged the interracial and interethnic contact that had been common in the mid-19th Century.

With the post-World War II influx of Mexican immigrants and Tejanos from other areas of Texas as well as the steadily increasing black population, the size, number, and influence of the early black-ethnic Mexican families declined.  While the border region of the Lower Rio Grande Valley continues to be a space of interracial-interethnic marriage freedom, it is important to recall how the process began that allowed this far south region of Texas to quietly challenge the rest of the United States on the question of interracial marriage.  The South Texas past may well suggest one type of future as the black and brown populations continue to grow in numbers and influence throughout the nation.