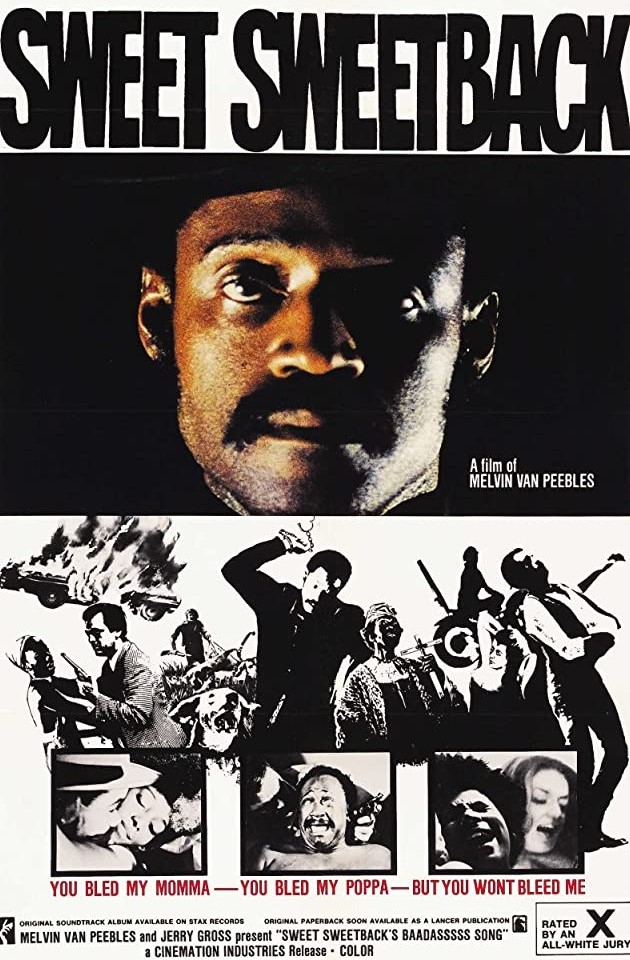 Hear a soundtrack specially chosen to enhance your learning about Blaxploitation Reexamined: One Critic’s Reinterpretation

In the article below University of Washington School of Public Health Professor Clarence Spigner challenges us to take a more nuanced look at the often-dismissed 1970s genre of so-called Blaxploitation films.

During the 1970s, critics of Hollywood cinema gave birth to “Blaxploitation,” a conflation of Black, as in the African American experience, and exploitation, meaning to benefit or take advantage. These critics argued that the white controlled movie industry produced low-budget, shoddily acted Black action films for African American urban audiences and in the process, generated a film genre featuring images of Black men and women exhibiting traits of extraordinary coolness, sexuality and violence. Blaxploitation, they said, celebrated urban pimps, pushers, hustlers, gangsters, detectives, ex-cons, hit-men, preachers, and cowboys who triumphed over “the man” (meaning the white establishment) within a corrupt and racist system. It is past time to reexamine the Blaxploitation genre and challenge the initial but continually powerful image of these films.

The numbers and dates of the Blaxploitation period in Hollywood vary. Many scholars categorize the peak years for the genre as between 1969 and 1974, although releases as early as 1961 and as late as 1985 are often classified as Blaxploitation films. By some estimates nearly 300 films in the genre were released. Many on the list, however, did not fit the Blaxploitation definition, such as the coming-of-age film, The Cool World (1963); the racial crossover film, Black Like Me (1964); the love story, For Love of Ivy (1968); the spiritual, Brother John (1971); and the science-fiction film, Brother from Another Planet (1984).

African American filmmaker Melvin Van Peebles’ urban action drama, Sweet Sweetback’s Baadasssss Song (1971), continues to be widely considered the epitome of the Blaxploitation genre. Van Peebles’ protagonist is a cool Los Angeles black stud named Sweetback, who, when he sees two white policemen beat an innocent black youth, smashes their heads in with their own handcuffs. He then flees to Mexico. Along the way he is aided by Black children, preachers, gamblers, pimps, and prostitutes.

Sweet Sweetback and “exploitation,” however, may be in the eye of the beholder. Van Peebles infiltrated the Hollywood establishment by purposely celebrating white-constructed stereotypes of Black men and women as pimps, prostitutes, and hustlers. Even when these were not the images projected, cinema of the 1960s still presented a basically white vision of the African American experience in such well-meaning movies as One Potato, Two Potato (1964), A Patch of Blue (1965), and Guess Who’s Coming to Dinner (1967). Even the wildly satirical Putney Swope (1969) reflected Black culture from a white imagination.

The 1968 assassination of Dr. Martin Luther King Jr. meant a change was going to come. Black films now rejected the sanitized Black bourgeoisie version of the African American world, which seemingly often aided and abetted white America by promoting cultural assimilation. The new militant separatist Black masses of the post-Watts Uprising (1965) era now identified blackness with the trappings of the ghetto – good, bad, and ugly. African American filmmakers such as Van Peebles now celebrated the bold, arrogant, sexual, brutal, violent and unapologetic Black protagonist because he reflected the real world where he and Black people actually resided. Van Peebles, however, was rare among the Black filmmakers of this era in that he wrote, directed, scored, and starred as Sweetback in Sweet Sweetback’s Baadasssss Song, thereby exercising total artistic control.

After Sweet Sweetback, Hollywood, which had previously been reluctant to produce any but a few Black or interracial films for fear they would not make money, now embraced a new business strategy that recognized Black screen images, even if they were considered offensive by middle class critics, Black and white. Hollywood now tapped into a large movie-ticket-buying Black (and sometimes white) urban audience who found something compelling in those new “bad Black images” on the silver screen. Sweet Sweetback was an exploitation film, but it was a harbinger of all the exploitation vehicles made quickly and cheaply by Hollywood that would follow.

With the commercial success of Sweetback, Hollywood executives gave a green light to the Blaxploitation Era. Metro-Goldwyn-Mayer launched Shaft later in 1971, which introduced former Ebony Fashion Fair model Richard Roundtree to movie audiences. Shaft was followed by Shaft’s Big Score (1972) and Shaft in Africa (1973), all centering around a Black, super-cool, virile, and confident New York private detective, John Shaft. The award-winning African American photographer from Life magazine, Gordon Parks, who had directed the coming-of-age film The Learning Tree (1969), also directed the first two Shaft films. The initial Shaft film had an electrifying soundtrack from singer-composer Isaac Hayes that became the first by an African American to win an Oscar. No other Oscars went to Shaft but the film was a commercial success, grossing $23 million in the U.S. box office alone. According to some observers, it singlehandedly saved MGM from financial ruin.

The urban dope drama Superfly came out the following year, 1972. Its story evolved around a Black cocaine dealer named Prince played by actor Ron O’Neal, intending to make one last score (drug deal) before getting out of the underground economy. Superfly also came with a biting score, and with an anti-drug message from African American singer and composer Curtis Mayfield. More Blaxploitation films followed. Pimps were featured in urban dramas such as The Mack (1974) and Willie Dynamite (1974). Hoodlums were highlighted in Book of Numbers (1973), Detroit 9000 (1973), Hell Up in Harlem (1973), Black Caesar (1974), Black Godfather (1974), Come Back, Charleston Blue (1974), JD’s Revenge (1976), and many others.

Black women were prominent in Blaxploitation films, usually as readily available, highly sexualized girlfriends or long-suffering single mothers. However, a superwoman or feminist icon also emerged that preceded and, in some ways, predicted the women warriors of Wakanda in the 2018 film Black Panther. Powerful, no-nonsense Black women starred as lead characters in such urban-action dramas as Melina (1972), Coffy (1973), Cleopatra Jones (1973), Foxy Brown (1974), Cleopatra Jones and the Casino of Gold (1975), Friday Foster (1975), and Sheba, Baby (1975). Tamara Dobson and Pam Grier emerged as the stars of these women-centered action films with Dobson starring in all the Cleopatra Jones films and Grier in Coffy and Foxy Brown. Ironically, 23 years after Foxy Brown, Grier made a reprise of her role in the 1997 movie Jackie Brown. There were also male-constructed stereotypes of sex and sass as seen in Black Emanuelle (1975), Black Mamma/White Mama (1973), and Caged Heat (1976).

Blackface in the horror genre was highlighted in Blacula (1972) and Scream Blacula Scream (1973). Based on Bram Stoker’s 19th century European vampire Dracula, the Black vampire Blacula, played by Shakespearean actor William Marshall, was adapted to fit the stereotype of the vampire as a hypersexual African sympathetically presented as the unwilling victim of circumstance and a mix of rage, retaliation, and redemption. William Marshall’s Prince Mamuwalde’s human life ends in 1780 as he tries to find a way of halting the slave trade in Africa. Just before he dies he encounters Dracula, who infects Mamuwalde with vampirism and gives him eternal life. The success of Blacula as a “positive” Black role  model came from the exceptional acting of Marshall in the title role. Other Blackface horror films were far less successful, such as Blackenstein (1973), Dr. Black and Mister Hyde (1976), and Werewolf of Washington (1973).

Remakes of white films with the protagonists turned Black were also evident in the Blaxploitation era. The urban drama Uptight (1968), set in Cleveland’s Hough neighborhood during the Black Power era, was an updated and transplanted version of the 1935 drama The Informer, about the Irish war for independence from Britain. Uptight focused on Black militants in the streets of Cleveland following the assassination of Martin Luther King Jr. The Lost Man (1969), was also a remake of the British noir drama about the Irish Republican Army, Odd Man Out (1947). The Black gangster drama, Cool Breeze (1972), was based on the classic crime noir, The Asphalt Jungle (1950), while Hit Man (1972) was a quick copy of the 1971 British crime thriller, Get Carter.

Black westerns were also part of the Blaxploitation genre. Ex-National Football League (NFL) athlete Fred Williamson starred in The Soul of Nigger Charley (1973) and Boss Nigger (1975), and joined fellow NFL ex-athlete Jim Brown in Take a Hard Ride (1975). These films were far below the quality of later Black themed westerns such as Django Unchained (2012) and The Hateful Eight (2015). They did not even rank with their 1972 contemporary film, Buck and the Preacher, starring Sidney Poitier and Harry Belafonte. America’s sordid history of slavery was also exploited in movies such as Slaves (1969), Mandingo (1975), and Drum (1976). None of them reached the caliber of 12 Years a Slave (2013). In fact, neither Slaves, Mandingo, or Drum could compare with Burn! (1969), the Italian production about politics, capitalism, and colonialism set against the backdrop of a slave revolt in a fictional Portuguese colony which featured Marlon Brando.

So-called Blaxploitation films did manage to deliver the message that Black Lives Matter 50 years before the BLM movement emerged on the U.S. political scene. If Hollywood had previously depicted Black and white gays as jesters and scoundrels, the 1976 film Carwash presented a gay male cross-dresser as a more positive role model. Lady Sings the Blues (1972) and Sparkle (1976) did not have the production budget of the later Dreamgirls (2006), but both gave valuable insights into the struggles of African American women in the white, male dominated music industry.

The Education of Sonny Carson (1974), Cooley High (1975), and Cornbread, Earl and Me (1975) were brutally realistic coming-of-age depictions of African American youth. Leadbelly (1976) shined needed light on the early 20th century era of Black rural poverty in the South which gave birth to the blues, while The Bingo Long and Traveling All-Stars & Motor Kings (1976) provided historical insight into the Negro baseball leagues of the 1920s through 1940s. Sounder (1972) and The River Niger (1976) featured Black family resilience in a racist society. The urban crime drama, Across 110th Street (1972), with its riveting soundtrack by African American R&B singer Bobby Womack, revealed what Black people already knew, that Black crime and police corruption went hand in hand.

While it has been characteristic of film critics of the time and film historians of later periods to dismiss the entire Blaxploitation era as one of mediocre films generating powerfully negative stereotypes of Black people, the story is far more complicated than that. True, there were hundreds of completely and gladly forgettable films, but few can argue that films such as Sounder or even Shaft, Superfly, and especially Sweet Sweetback’s Baadasssss Song spoke to Black audiences in ways that had never happened before and broadened and reshaped the narrative of Black life in the late 20th century United States.