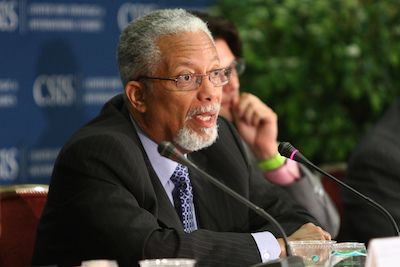 Robert Perry was born in Durham, North Carolina in 1945.  He graduated from Hillside High School in that city in 1963. During his time in high school, Perry played in the marching band, was a member of the Honor Society, and served as president of his sophomore and senior classes. He was an acolyte at St. Titus Episcopal Church. As a member of Boy Scout Troop 55, Robert Perry earned the rank of Eagle Scout.

Perry graduated with a Bachelor’s Degree in Political Science from Wittenberg University in Springfield, Ohio in 1967. He completed a Master’s Degree in International Relations at American University in Washington, D.C. the following year.

Robert joined the U.S. Foreign Service in 1968. He began his career with the U.S. Agency for International Development (USAID) and served in the Vietnam rural development program. In the 1970s and early 1980s he was a Special Assistant to the Undersecretary for Political Affairs, serving at the South African and Cuban desks. He was also an analyst for the Bureau of Intelligence and Research with the U.S. State Department.

From 1986 to 1989, Perry served as the Deputy Chief of Mission in Mauritius. From 1990 to 1994, he was the Division Chief and Office Director for the Bureau of International Narcotics and Law Enforcement Affairs, then from 1995 to 1998, Perry was the Deputy Chief of Mission in Bolivia. Perry also served at U.S. Embassies in Mexico, Ethiopia, and Chile. While in Latin America, Perry managed a $100 million counternarcotic program.

In 1998 President Bill Clinton nominated Perry to become Ambassador to the Central African Republic.  After U.S. Senate confirmation he served in Bangui, the nation’s capital, from 1998 to 2001. While in the Central African Republic, Perry coordinated the contribution of the United States to the United Nations peace building efforts in the country.

In July 2001, Perry became the Deputy Assistant Secretary in the Bureau of African Affairs. There he was responsible for Economic Policy, West Africa, and Public Diplomacy, including the promotion of trade under the 2000 African Growth and Opportunity Act. Robert Perry held that post until December of 2002 when he retired.

Ambassador Perry joined the Corporate Council on Africa (CCA) in 2003 after his thirty-four-year career with the Department of State. He serves as vice-president of the CCA and manages the Councils conferences and programs. Perry organized the 2003, 2005, and 2007 U.S.-Africa Business Summits. He was also the managing editor of the CCA’s March 2009 report, The United States and Africa—Policy Recommendations for the American Private Sector for the Obama Administration. At the CCA, Perry works to develop an understanding of business opportunities in Africa and foster relationships for future partnerships in countries such as Ghana, Nigeria, South Africa, Kenya, and Ethiopia.

Robert C. Perry is a member of the Council of Foreign Relations, the American Foreign Service Association, and the Association of Black American Ambassadors. He has served on the board of several Non-Government Organizations (NGOs) including as a Trustee of Phelps Stokes, an educational NGO.

Perry and his wife, Blossom, have two children and five grandchildren.