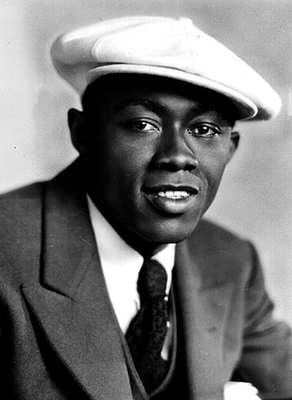 Reviled by Langston Hughes and many others for his film and stage portrayals of black characters as “lazy, shuffling, no-account Negroes,” Perry transformed himself from a minor-league minstrel clown into one of the most highly-paid black actors in Hollywood, California history at the expense of a legacy which many find revolting and others see as pioneering in times far different from our own.

Lincoln Theodore Monroe Andrew Perry was born in Key West, Florida in 1902 to West Indian parents. He arrived in Hollywood in the early 1920s after a period on the Vaudeville comedy circuit. When a Twentieth Century Fox Studios talent scout spotted him, Perry was given a successful screen test and his career began as “Stepin Fetchit” (Perry named his persona after a race-horse). Perry parlayed his lanky frame, unfocused gaze and dancer’s skilled movements into a character that movie audiences found hilarious and captivating. Mass audiences readily accepted stereotypical portrayals of illiterate and servile blacks and Perry became the most successful of a number of actors who pursued such roles.

Between 1925 and 1976 Perry appeared over fifty films including seven in 1934 alone. In most of his 1920s and 1930s movies Perry was “comic relief” in action films which featured major film stars of the era. Perry’s on-screen success allowed him to ride in expensive chauffeur-driven cars with servants at his beck and call. He lived the high-life and never shrank from public attention. By the end of the 1930s Perry’s extravagant lifestyle had bankrupted him and NAACP criticism of his portrayals reduced his popularity with the studios and general audiences.

In the early 1960s Perry converted to Islam and counted among his close friends Malcolm X and Muhammad Ali. In 1974 Perry made a brief appearance in Muhammad Ali, the Greatest. Nonetheless he spent his last years in relative obscurity.

Lincoln Perry opened doors that had been slammed shut prior to his arrival on the scene. He was highly paid as he worked in the best films, at the best studios and for the best directors. He never shrank from his personal vision of what he could, or would, do to achieve his goals. Many actors who are employed in entertainment today would not be working if Step N’Fetchit had not gone before them, a fact noted by the Hollywood NAACP when in 1976 it presented him a Special Image Award and two years later when Perry was inducted into the Black Filmmaker’s Hall of Fame.