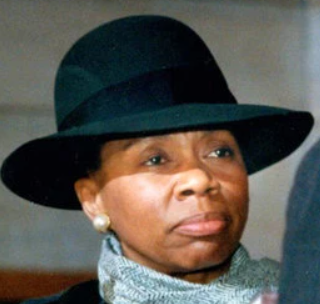 Elected mayor of Hartford, the capital of Connecticut, in 1987 at the age of fifty-six, Carrie Saxon Perry became the first African American woman to serve as mayor of a major city in New England. Known for her unique broad-rimmed hats and combative approach, Perry was a formidable force serving in office from 1987 to 1993 before being defeated by the late Michael P. Peters in 1993.

Perry is widely recognized for easing racial tensions in Hartford; notably, in 1992 when many cities erupted after the acquittal of four white policemen in Los Angeles for the beating of Rodney King. Perry visited local black neighborhoods, urging restraint and respect, and they listened. Perry also devoted a great deal of time and energy to reducing the rampant drug trafficking and gang activity that was on the rise at the time.

Carrie Saxon Perry was born in Hartford in 1931. In 1949 she enrolled as a political science major at Howard University but left the institution in 1951 to raise a child.
Perry initially remained in Washington D.C., but following the assassination of President John F. Kennedy in 1963 and the nation’s growing involvement in the Vietnam War, as well as mounting racial tension, Perry returned to Hartford in 1966 and worked as a community activist.

When Perry returned home, she became involved in various community organizations like the Community Action Agency, the local anti-poverty agency, and various public housing organizations that supported tenants’ rights. She focused on the most pressing needs of the Hartford neighborhoods that were most impoverished, recruiting and training volunteers, opening field offices, and staffing them with neighborhood residents. One of her most successful projects was a small multi-service center dedicated to aiding the community. The center provided infant daycare services, offered education to students struggling in traditional public schools, and also functioned as a residence for homeless teenagers.

Carrie Saxon Perry’s political involvement stemmed from an outgrowth of her desire to incite change and “attack” the system from within. Campaigning as a Democrat, her first run for state representative ended in defeat in 1976. In 1980 however, she was elected, served as chair of the bonding committee, and was a member of committees on education, finance, and housing. She also served as assistant majority leader. Perry remained in the legislature another seven years before her successful run as mayor of Hartford.

Carrie Saxon Perry has a son and four grandchildren. She no longer lives in Hartford.