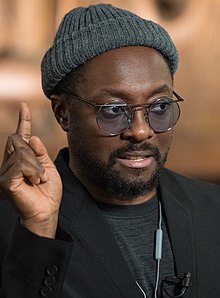 Hear a soundtrack specially chosen to enhance your learning about will.i.am (1975- )

Adams and classmate Allan Pineda began to perform together at raves and nightclubs in Los Angeles with fellow student Dante Santiago, and together formed the group Atban Klann, an acronym for A Tribe Beyond A Nation. The group caught the eye of rapper Eazy-E, who signed them to his record label, Ruthless Records, in 1992. After the death of Eazy-E, the group changed their name to The Black Eyed Pods, but in 1997 began using the name The Black Eyed Peas when they signed that year with Interscope Records. Over the next four years Adams gained mega stardom while working with The Black Eyed Peas, releasing eight albums, traveling the world, and winning numerous awards. He embarked on his solo career with his debut album Lost Change in 2001 with Atlantic Records. His second album, Must B 21, was released in 2003, and third album, Songs About Girls, was released in 2007. That album was certified gold in Poland three days before its release, selling over 500,000 pre-ordered copies. His fourth and final solo album, #willpower, was released in 2013.

Branching into technology, Adams became the head of marketing for the online music company Musicane in 2006. He founded the i.am Angel Foundation in 2009, and made interplanetary history with the single “Reach for The Stars,” the first song ever played from NASA’s Curiosity rover from the planet Mars in 2012. Adams released his first wearable Puls cuff, a smartwatch in 2014, along with eye wear, ill.i Optics. The same year Adams became CEO of 3D Systems in South Carolina, and acquired Sensiya, a Tel Aviv, Israel tech company. His Ekocycle bicycle made with recycled materials was introduced in 2015 and his second smartwatch, AneedA, came to the market in 2016. Adams acquired Wink, a smart home platform in 2017, and along with author Brian David Johnson, released the children’s book WaR: Wizards and Robots in England in 2018. His facemask with Bluetooth by XUPERMASK was released in 2021.

Adams briefly attended the Fashion Institute of Design & Merchandising in New York City and debuted his own clothing line, i.am+, in 2005. He is the recipient of a BMI President’s Award, an Emmy, A Clio Award, a Kids Choice Award, a Latin Grammy, seven American Grammy Awards, and ten Television Rack Awards. The Institute of Engineering and Technology awarded Adams an Honorary Fellowship in 2017 for his outstanding contributions to the engineering profession.

Gil Kaufman, “Bono Collaborated with Will I. Am, Jennifer Hudson, and Yoshiki on inspiring ‘Sing For Life,’” Billboard.com, March 24, 2020, https://www.billboard.com/articles/columns/rock/9341336/bono-will-i-am-jennifer-hudson-yoshiki-sing-for-life; Clara Moskowitz, “Mars Rover Belts Out Will I. Am Song From Red Planet in Cosmic First,” Space.com, August 28, 2012, https://www.space.com/17341-mars-rover-beams-will-i-am-song.html.