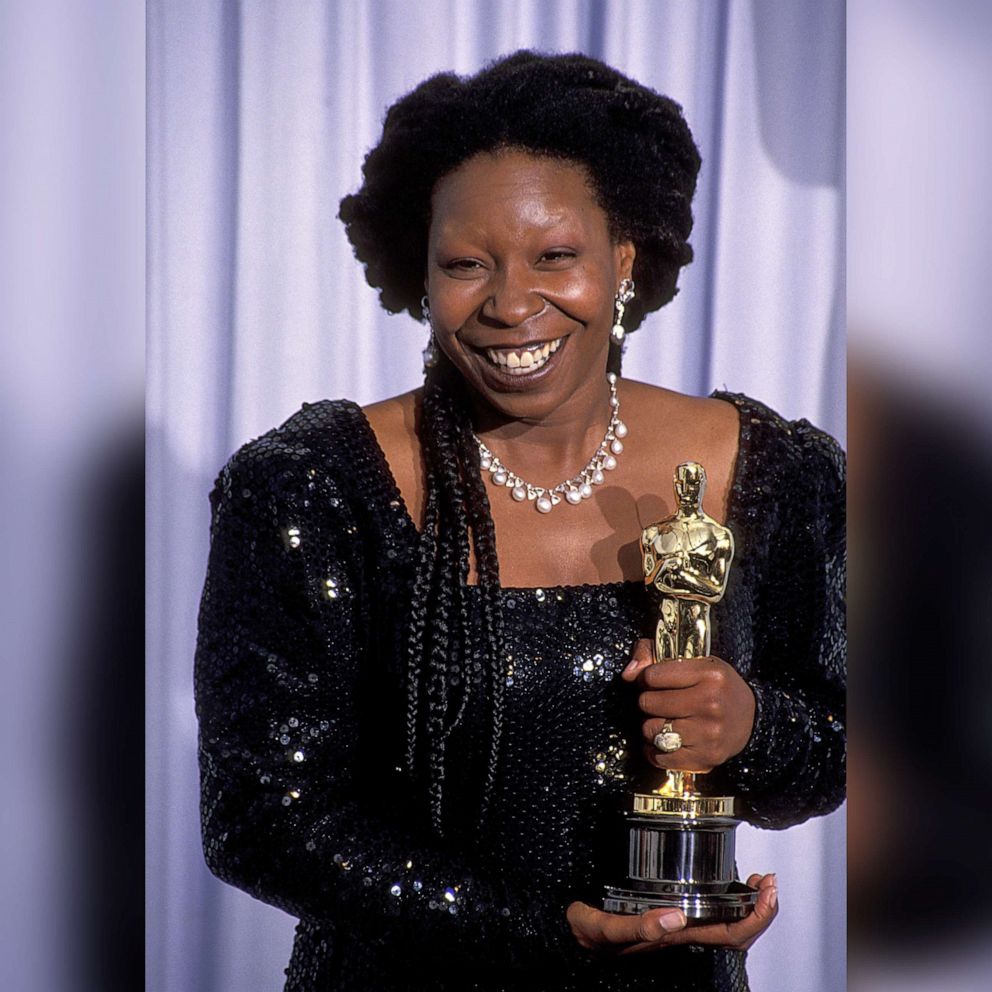 Legendary actor, activist, comic Whoopi Goldberg was born Caryn Elaine Johnson in Manhattan, New York on November 13, 1955, to Robert James Johnson, Jr., a minister, and Emma Harris Johnson, an educator and a nurse. Her interest in drama and the spoken word began at the age of eight when she studied and acted in children’s plays in 1963 with the Hudson Guild Theater, New York City. She attended St. Columba Catholic School in Chelsea, New York. However, she transferred to Washington Irving High School, leaving in 1972. Afterward, she studied professional theater at New York’s Herbert Berghof (HB) Studio. Goldberg married Alvin Martin, a drug counselor, in 1973. They had a child, Alexandrea Martin Dean.

In 1981 she adopted the stage name, Whoopi Goldberg, because she felt that a Jewish last name would benefit her professional career. Goldberg’s first major film was The Color Purple in 1985. She starred as the downtrodden wife, Miss Celie, and earned an Academy Award nomination for the Best Actress in a Leading Role.  In 1985 she was awarded a Grammy for Best Comedy Recording for “Whoopi Goldberg – Original Broadway Show.”

Goldberg married Netherlands cinematographer David Claessen in 1986. In 1991 she starred in the movie, Ghost where she won an Academy Award (Oscar) for Best Supporting Actor.  In 1992, Goldberg won Sweden’s Aftonbladet TV Prize for the Best Foreign TV Personality – Female in Captain Planet and Planeteer for voice dubbing. She also starred in the film, Sister Act in 1992 and reprised her role the following year (1993) in Sister Act 2: Back in the Habit. The success of these films made Goldberg one of the highest-paid actors in the movie industry. She married Lyle Trachtenberg, an actor and union organizer from Los Angeles, California, in 1993 but they divorced the next year, 1994.

Over the first two decades of the 21stt Century, Goldberg would be one of the most celebrated personalities in film, TV, and Theater. In 2001, she appeared in two films, Rat Race, and Kingdom Come. She also appeared in the Broadway Musical, “Thoroughly Modern Millie” and won a Tony as the producer. Two years later in 2003, Goldberg starred in a one-woman Broadway show, “Ma Rainey’s Black Bottom.” In 2005, she received an Emmy nomination for Outstanding Individual Performance in a Variety or Music Program for “Whoopi: Back to Broadway-The 20th Anniversary.” This television special was taped at the Lyceum Theater in New York City.

In 2007, Goldberg became a co-host on the daytime television talk show, The View. Her work with this show brought her Daytime Emmy Awards in 2010 and 2011 as Outstanding Entertainment Talk Show Host.  In 2013 she was honored for her untiring support for the LGBTQ community with the Human Rights Campaign’s Ally for Equality Award in New York City. Two years later (2015), Goldberg received the Black Reel Award for Outstanding Actor in a TV Movie, or Mini-Series for performance in the television movie, A Day Late and a Dollar Short.

In 2020, Goldberg was presented the NAACP Image Award for Outstanding Host in a Talk or News/Information (Series or Special) – Individual or Ensemble, for her work on the View.

Having acted in more than 150 films, Whoopi Goldberg is one of the few American entertainers to have reached the EGOT category, having won the four major American awards for professional entertainers, the Emmy (Television) a Grammy (Music), an Oscar (Film) and a Tony (Theater).