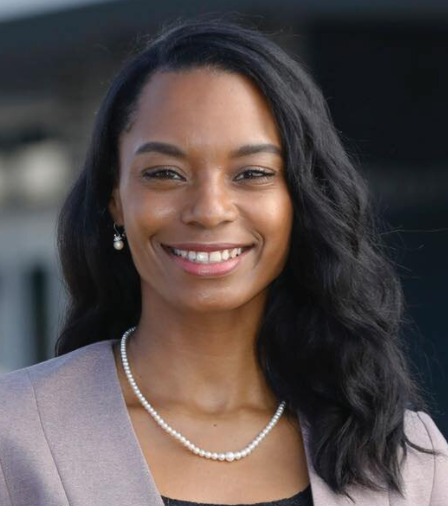 T’wina Nobles is a Washington State Senator representing the 28th Legislative District, which includes the cities of Fircrest, University Place, Lakewood, Steilacoom, DuPont, and a portion of Tacoma, Washington, as well as Ketron Island, Anderson Island, and McNeil Island and Joint Base Lewis McChord. She is currently the only Black member of the Washington State Senate, and the first Black person to serve there in 10 years, after Rosa Franklin served from 1993 to 2010.

Nobles was elected in November 2020 and took office in January 2021.  A Democrat, she unseated the Republican incumbent Steve O’Ban, a leader in conservative Republican politics.

Nobles serves as vice chair of the Early Learning & K-12 Education Committee as well as vice chair of the Higher Education & Workforce Development Committee. She also sits on the Transportation Committee and the Behavioral Health Subcommittee.  She has served as primary sponsor for bills to improve the educational experience for children in foster care, provide mental health sentencing alternatives, and expand access to college scholarships.

Nobles was born in Frankfurt, Germany on December 14th, 1981, where both of her parents were stationed with the U.S. military. Back in the United States, the family lived in California, Georgia, and Alabama. Family instability led Nobles to enter a shelter in Alabama at 13. She was placed in the foster care system at 15 and eventually was reunited with her father in California. She married there and moved with her husband to Joint Base Lewis McChord in 2000.

Nobles, who has four children, dedicated herself to becoming an educator. She attended Tacoma Community College then graduated from the University of Puget Sound (UPS) in 2006 with an undergraduate degree in politics and government. She then earned a Master of Arts in Teaching from UPS in 2007.

Nobles taught for the Metropolitan Development Council’s College Bound program at Stadium High School and Lincoln High School, both in Tacoma. She then went to work for the Tacoma Urban League in 2011 and became its president and CEO in 2017.

Senator Nobles has also been heavily involved in community service. Beginning in 2015, she served as a twice-elected member of the University Place School Board. In 2012 she founded Ladies First, an in-school and after-school program to help empower young women. She served on the board of the Statewide Poverty Action Network and on the board of the MultiCare West Region Mary Bridge Board. Additionally, Nobles coached cheerleading and basketball at Joint Base Lewis McChord and for the City of Lakewood and the YMCA. Her awards include the 2014 and 2018 PTA Golden Acorn Award, the 2014 City Club of Tacoma Dennis G. Seinfeld Emerging Leader Award, and a 2014 Washington Association of School Administrators Community Leadership Award.

Senator Nobles lives with her four children in Fircrest, Washington.