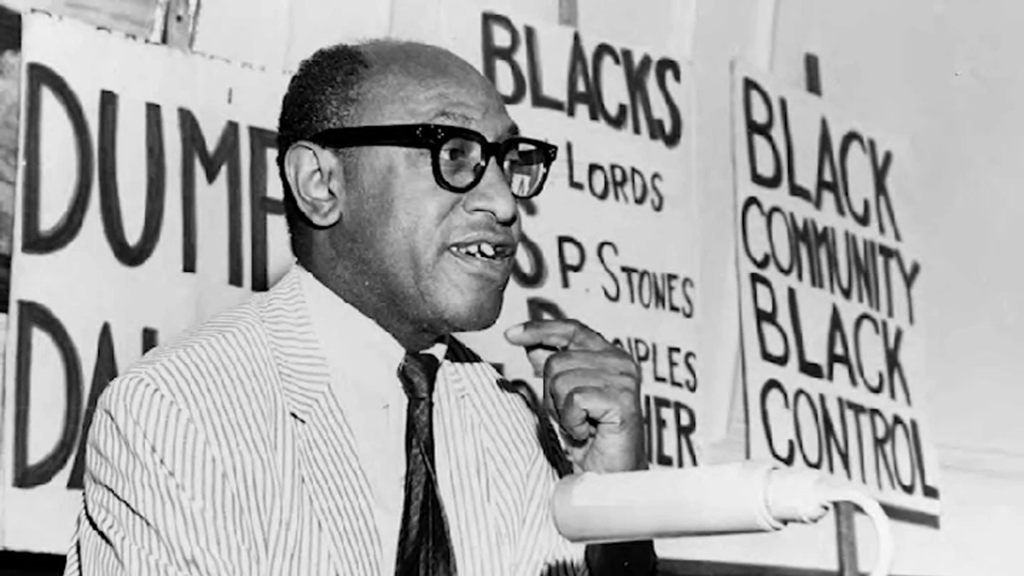 Timuel D. Black Jr. was an African American educator, civil rights activist, historian, and author. Born in Birmingham, Alabama, on December 7, 1918, he was one of four children of Timuel Dixon Black Sr. and Mattie McConner Black. In the summer of 1919, Black’s parents moved to Chicago, Illinois, along with their three children: Charlotte, 10; Walker, 4; and infant Timuel Jr. They took the northbound train along with thousands of other Black Alabamans in what would later be called the Great Migration.

Black grew up on Chicago’s South Side in the Bronzeville community. He graduated from DuSable High School in 1937; while there he protested white-only employment in Bronzeville stores. After high school, Black worked at several small stores and then was employed at the Metropolitan Assurance Co.

In 1943 Black was drafted into the U.S. Army and was assigned to the 308th Quartermaster Corps., which landed in Normandy, France, four days after D-Day. Black received four bronze battle stars and was honorably discharged in 1945. One year hater he married Norisea Cummings and the couple had two children, Ermetra and Timuel Kerrigan, before the marriage ended in divorce in 1958.

In 1949 Black enrolled at Roosevelt University and graduated in 1952 with a bachelor’s degree in sociology. He earned an M.A. degree from the University of Chicago in 1954. That same year Black began teaching at Roosevelt High School in Gary, Indiana. Two years later, Black returned to DuSable High School and taught there until 1959. That year he married his second wife, Ruby P. Battle; the marriage lasted until 1968.

During the 1960s Black became active in the Chicago Freedom Movement with Dr. Martin Luther King Jr. In 1963, he organized 2,000 Chicagoans to participate in the March on Washington. Black was the president of the Negro American Labor Council (NALC), Chicago Chapter, and later served as an administrator in the Chicago Teacher Corps. In 1969 he was appointed dean of Wright College, a part of the City Colleges of Chicago, and in 1972 he was appointed vice president for academic affairs at Olive Harvey College.

In 1973 Black’s position was terminated but he was rehired following protests from students, faculty, and local civil rights organizations. He was then promoted to a new position as director and chairperson of community affairs for the City Colleges. When budget cuts eliminated that position in 1975, he returned to teaching sociology and anthropology at the Loop College (now known Harold Washington College). Black held that professorship until he retired from City Colleges in 1989.

In 1982 Black met his third wife, Zenobia Johnson-Black, when both were campaigning for then-state Rep. Harold Washington. One year later they were part of a coalition of Black Chicagoans who elected Washington as Chicago’s first Black mayor. Timuel Black taught courses at Roosevelt University, DePaul University and Columbia College and worked on the Black Metropolis Oral History Project. He also authored several books including Bridges of Memory: Chicago’s First Wave of Black Migration (2005) and Bridges of Memory: Chicago’s Second Generation of Black Migration (2008). His memoir, Sacred Ground: The Chicago Streets of Timuel Black was released in 2019 when he was 101. Black mentored other political activists and politicians including future president Barack Obama.